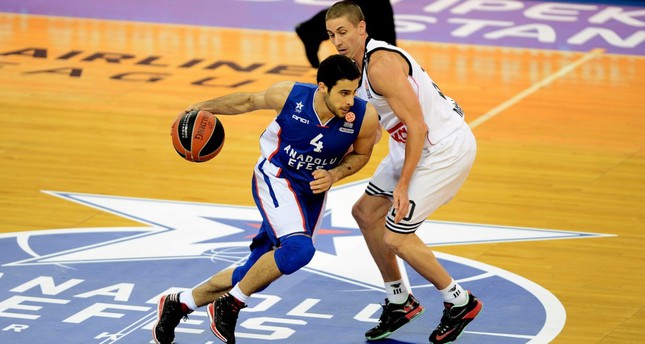 Real Madrid await Anadolu Efes, who can win Group A with a win in Spain, while Galatasaray need a miracle to progress

It will be a case of the winner takes it all tonight as Anadolu Efes take on Real Madrid with the winner guaranteed to take the top spot in the final week of the EuroLeague's first round.

Real Madrid currently sit in the top spot with a 7-2 record while Efes have a 6-3 record. But the Istanbul side will overtake the Spanish giants in the event of a win by virtue of the better head-to-head record.

The two sides met earlier in the competition in a classic encounter that saw Efes defeat the giants 75-73 with a buzzer beater from Matthew Janning, helping to propel the club into the position they currently enjoy.

Victory this time, however, will be a harder proposition. Real Madrid will be on their home court while Efes have players missing. Nenad Krstic is still out despite returning to training while Cenk Akyol is definitely out, although squad rotation is something Efes are accustomed to, with coach Dusan Ivkovic having used a different starting lineup in every game so far.

Ahead of the game, Ivkovic warned about Real Madrid's tempo as well as the injury battles his side needs to overcome.

"The last game of the regular season in Madrid is also the Game of the Week," said Ivkovic. "We want to play a good game. As good news, Nenad Krstic started practicing with the team again. From the other side, Cenk Akyol started with the team, but unfortunately his injury extended. Also Furkan Korkmaz is sick and questionable for the game."

Ivkovic added: "After the Nizhny Novgorod game, I definitely expect a better performance from my team. We have one good experience against them and scored more transition points than Real Madrid in our first game in Istanbul. The key to the game will be controlling the tempo, stopping Real Madrid's easy scoring and transition and trying to decrease Sergio Rodriquez's assists."

While Korkmaz may be forced to sit out, the youngster plans to get on the court by hook or by crook. Despite doubts, the wing player spoke like a man that had not given his ailments a second thought, and expressed his determination to take the top seed in the group.

"Real Madrid is not an unbeatable team, we showed this in the first game in Istanbul," said Korkmaz. "But it will be a hard road game. We have some injuries in the team and we have a heavy calendar. We are going to Spain to get a victory and want to qualify to the Top 16 as group leaders."

While Efes have the luxury of only worrying about first or second place, Galatasaray have to pull off a tough win against group leader Olympiacos Piraeus and hope other results go their way.

Gala had been reasonably comfortable three weeks ago but three straight defeats has put the Istanbul giants on the outside looking in. The Yellow-Reds currently sit in fifth place behind Neptunas Klaipeda - the side they decisively lost against last week.

Not only do Gala have to come out on top against a quality side like Olympiacos but they have to hope bottom of the group Valencia pull off a win against Neptunas Klaipeda for the them to stand a chance of advancing.