Obradovic cautious ahead of next round 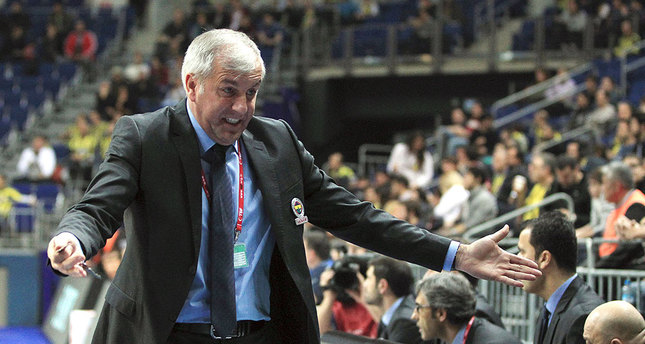 Fenerbahçe coach Zeljko Obradovic told his players they need to "start again" for the Top 16 after finishing the opening round with an 87-81 win over Bayern Munich. The Istanbul side moves now into Group F where they will come up against CSKA Moscow, Olympiacos, Anadolu Efes, Unicaja Malaga, Laboral Kutxa, Nizhny Novgorod and EA7 Milano. Their title credentials were laid down on Friday, as they comfortably beat Bayern Munich at home in a game they never ran away with but were in total control of. Coach Obradovic, a man who knows what a EuroLeague-winning team looks like after scoring five in his time at Panathinaikos, told his players to go back to the drawing board and ready themselves for a new challenge next round.

"First of all, I am very happy that we had such great support from our fans," said the Serb, adding, "It didn't matter that the game was not important. I told the players before the game, we must respect ourselves and the people who are coming to support us. I am satisfied with this part of the EuroLeague. The goal was to be in the Top 16, and now let's say that everything starts again. From our experience last year, we must understand that we will play 14 games and they will be very, very tough. Congratulations to our players because this was a good result, and also to our fans. We are together in everything and must continue like that."

Last season, a successful first round was followed by a woeful Top 16, so it is easy to understand his caution. But his team were very impressive on Friday, something that must only give Obradovic confidence.

Fenerbahçe needed a large point swing to overcome Barcelona in the table and they certainly set their stall out to at least challenge that deficit. Bogdan Bogdanovic destroyed the Germans early on in transition, twice scoring easily, while Semih Erden was getting everything under the basket.

A Bogdanovic 3-pointer on a pull-up jumper from a pick gave the hosts a nine-point lead to go up 21-13 with two minutes left in the opening quarter, which is how it stayed until Anton Gavel hit a 3 late to make it 21-16 after 10 minutes.

Oğuz Savaş kept the run going early in the second quarter as he hit a neat midranger to bail out possession before netting an awkward layup plus the foul to open up a 10-point lead just a minute into the second quarter at 26-16. A lefty hook over Bryce Tayler after a defensive switch only opened things further. The baskets stopped raining from there, however.

A couple of defensive plays did not work out for Fener and a Paul Zipser 3-pointer brought Bayern to within two points at 30-28.

A late push from Andrew Goudelock, who had been almost anonymous up though that point, some defensive stops and a Jan Vesely layup helped Fener go into the break up 42-33.

In the second half, a slow start moved to a nine-point game with three minutes to go thanks to some expert drive-and-kick basketball, although Bayern refused to lie down, consistently replying with mini-runs of their own. The nine-point lead was soon reduced to three after three straight turnovers from Fener.

Serhat Çetin drained a 3 to stop the bleeding and Nemanja Bjelica laid one up allowing Fenerbahçe to take a 64-56 lead into the final period.
Fenerbahçe felt comfortable enough to give 18-year-old Berk Uğurlu a run out, and the youngster impressed with his pace and purpose. An early 12-point lead was rarely troubled for the rest of the game.