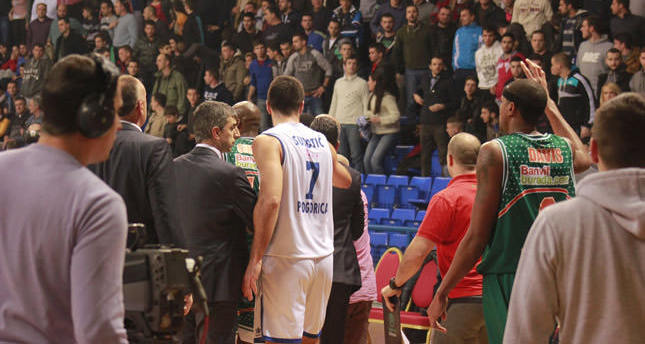 by Daily Sabah Jan 09, 2015 12:00 am
Turkey's Banvit Bandırma got the Eurocup road win over Buducnost (74-68) on Wednesday but the game descended into chaos late in the fourth quarter when a Montenegrin fan entered onto the court.

Banvit Bandırma led Montenegrin team KK Buducnost Podgorica 68-59 with two minutes and 17 seconds left in the match, with a Banvit player lining up for a free throw. As the ball bounced off the rim, a male Buducnost fan pushed Sammy Mejia in the back before being floored by E.J. Rowland. This prompted the American guard to run to his team-mate's rescue and throw a punch that sent the offender crashing to the floor. When Mejia also retaliated, a scuffle ensued, forcing security stewards and police to move in before the game eventually resumed after a 15-minute delay. Both Mejia and Rowland were sent off, but Banvit managed to win the game 74-68.

Chuck Davis was unstoppable in the paint as Banvit Bandırma defeated Buducnost. Davis amassed a career-high 28 points on 11-of-12 two-point shooting. Vladimir Dragicevic added 15 points and 10 rebounds for Banvit against his former team. Banvit led by as many as 16 in the fourth quarter before some technical fouls aided in a late Buducnost comeback. However Davis ensured the win for the visitors.

A 25-year-old Red Star Belgrade fan was stabbed to death in fan violence before the team's Euroleague basketball match at Galatasaray in Istanbul last November. A Turkish suspect involved in the murder of a Serbian basketball fan in Istanbul has been jailed. The tension has heightened in the games between Turkish and Balkan teams since then. Galatasaray will face Crvena Zvezda Telekom Belgrade, another Serbian side on Jan. 16 in a third game of the Euroleague Top 16 match-up.