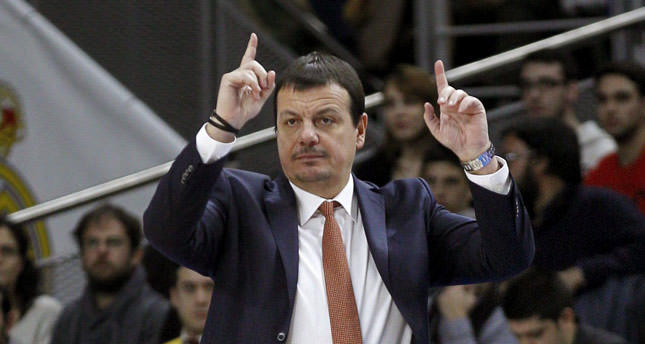 by Daily Sabah Jan 12, 2015 12:00 am
Galatasaray Liv Hospital will meet Serbia's Red Star Belgrade on January 16 for a EuroLeague match; however, it was revealed that the Turkish team's head coach, Ergin Ataman, has been banned from visiting Serbia by Serbian Parliament.

Red Star's President Nebojsa Covic said in a press conference on Saturday that he would meet Serbian Prime Minister Alexander Vucic to request that Ataman be allowed to enter Serbia.

Covic said, "I will meet Prime Minister Vucic to let Ataman enter Serbia. We hope Galatasaray's head coach can come to Belgrade. If he can come, this will be a good opportunity for him to apologise from Serbian people. If he can't come, the game may be played in another country. We don't want this. We can take every measure for the game's safety. We take full responsibility."

Red Star Belgrade fan Marko Ivkovic was killed on November 21 in Istanbul when a conflict erupted between Turkish and Serbian fans who could not enter the Abdi İpekçi hall to attend a EuroLeague match. The Serbian prime minister denounced Ataman for calling Serbian fans "terrorists."

Expressing his sadness over the killing of Ivkovic in a press conference after the match, Ataman said that he used this expression without being aware of the death of a Serbian fan. "When I was making my statements, I did not know that a youngster had been killed. If I had known, I would have offered my condolences before my speech. It is an unfortunate development, which has drawn me into an incident that has nothing to do with sports. I am against any kind of terrorism in sports."

After the incident, Vucic told Turkish Prime Minister Ahmet Davutoğlu that Ataman is not welcome in Serbia.