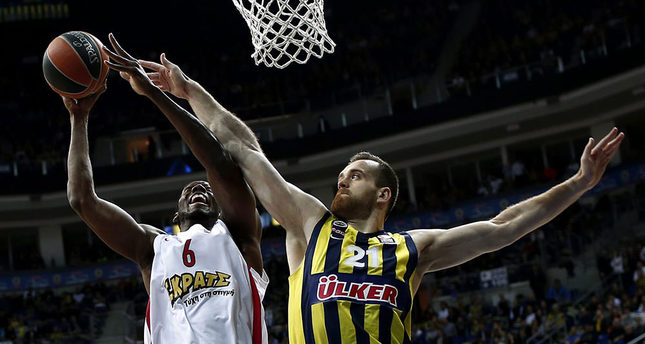 by Daily Sabah Jan 18, 2015 12:00 am
Despite a virtuoso performance from Andrew Goudelock, Fenerbahçe conspired to throw away a winnable game against Olympiakos, losing 74-68 after a late collapse. In a tight game, Fenerbahçe had the better of the game for much of the proceedings. But after taking a four-point lead late on, Fenerbahçe were sunk by Vassalis Spanoulis. After Goudelock sunk a step-back 3-pointer with two minutes go and Bogdan Bogdanovic hit another late on, Fenerbahçe looked to be in the driving seat but the Istanbul gave up six unanswered points to Spanoulis to lose a winnable game.

Fenerbahçe coach Zeljko Obradovic apologized to the fans after the game and he admitted that his team failed during the critical moments in the game. "We played against a very powerful team with a big motivation," said Obradovic. "They were also a very experienced team. They are one of the best defending team in Europe. The problems popped up in the second quarter. Especially in the last three minutes. We said that we should have played tougher against them. "With 17 seconds to the finish, the referees did not see the foul against Nikos Zisis. After that the game followed a much more different path. The small details determine how a match will finish. I congratulate Olympiakos for their win. We will go on fighting."

Olympiakos coach Giannis Sfairopoulos praised his side's ability to win away from home and claimed his side deserved the win.Goudelock was the game's leading scorer, hitting 23 points, nailing five of 11 3-point attempts while Jan Vesely had 13 points and his customary highlight dunk. Olympiakos's 3-point shooting was perhaps the difference as the Greek side hit an incredible 57.1 percent of their 21 3-point attempts.

Fener take their place in fourth in Group F of the Top 16 but sport a losing record at 1-2 with tough fixtures still yet to play. Two home games in the Top 16, against Olympiakos and CSKA Moscow, have resulted in zero wins for the Istanbul side.