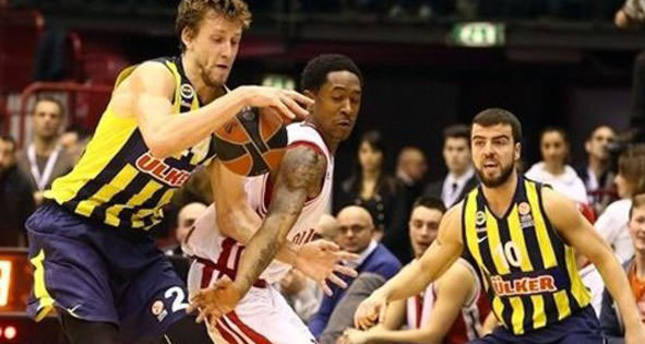 The Istanbul team got back to its winning ways, collecting their fourth straight away win by taking down upstart Milan. While Fener celebrated, Galatasaray lost their momentum in a disappointing loss

Fenerbahçe made it a perfect three last night as they beat Emporio Armani Milan 81-72, notching their third straight win over the Italian giants this season.

The Istanbul side now boast an exemplary road record, winning their last four consecutively as well as six of their last seven away from home. Their record is now back to .500, with a 2-2 tally in the Top 16.

Leading more or less throughout the game, Fenerbahçe found it hard to completely shake off the Italians, with former Brooklyn Nets shooting guard MarShon Brooks keeping the hosts close until the last two minutes.

Fener held just a four-point lead going into the last two-and-a-half minutes before Jan Vesely and Bogdan Bogdanovic stepped up to take the game away from the Milan side.

Vesely pulled out one of his patented two-hand alley-oop dunks to get the ball rolling before Bogdanovic stole the ball and converted it at the other end.

Vesely, who finished with a team-high 15 points, credited his side's team play for his own scoring and the win.

"I'm happy for the win," said the Czech star, known as the "Dunking Ninja." "It's an important one, coming on the road. We're 2-2 now. We played hard from the beginning; we didn't lose our concentration. I try to do my job, just to play hard, get to the open positions and follow the pick-and-roll. That's what I do, and today my teammates found me."

The win wasn't just an impressive way to get back to an even record, it was also a show off of strength after a disappointing home loss to Olympiakos against a side that had just notched a win against an impressive Malaga team away from home.

Fener coach Zeljko Obradovic praised his team's performance, saying they are finally playing better. "We played Milan a week after they played a great game in Malaga, and we understood that the most important thing was to play well on defense," said the Serb. "We reacted well to the worst moments. We're trying to improve our game in the clutch moments, and after losing two games with CSKA and Olympiakos, we finally played better."

Elsewhere in the EuroLeague, Galatasaray weren't able to take advantage of their good form as they went down at home to Alba Berlin.

Last week, Gala enjoyed an impressive win away from home in Belgrade among an especially hostile crowd. After that game, Ergin Ataman had claimed that his side would not find it difficult to progress to the next round. On Thursday, however, his team were knocked down by Berlin 75-65 in the Abdi İpekci Arena.

"We challenged them really well until the end of the game despite the absence of our key players, Carlos Arroyo and Ender Arslan, at the playmaker position," Ataman said. "But in the last couple of minutes, especially in the last two minutes, we struggled to set the offense. And the missing shots from the perimeter were too much to handle for us in those minutes. Congratulations to ALBA Berlin for their win."