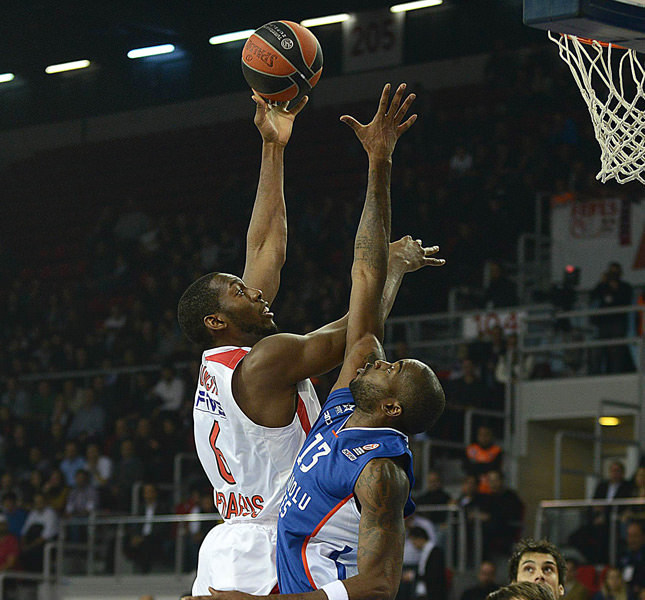 Anadolu Efes put in a rampant performance as they blew previously unbeaten Olympiacos out of the water. Moreover, coach Ivkovic wants the win to be the beginning of a new era

Anadolu Efes put on a clinic on Thursday night as they destroyed Olympiacos's 100 percent record in the Top 16 with an 84-70 win at the Abdi Ipekci Arena in Istanbul.

Before the game, Olympiakos had been one of the form teams in the EuroLeague, winning all four of their Top 16 games while conceding the fewest amount of points of any team in the competition. But Efes made a mockery of their record, putting in a red-hot third quarter to dismantle the Greek giants.

It was Efes that exhibited the water-tight defense, only allowing 12 points in the third quarter as the home side opened up a five-point lead going into the final quarter, where they put the Greeks to the sword.

The win came as something of a relief to Anadolu Efes after an inconsistent start saw them with a 2-2 record after four games. In their previous losses to CSKA Moscow and Nizhny Novgorod - a particular sore 19-point loss - Efes had been below their best, throwing away opportunities to take control of Group F. Coach Dusan Ivkovic, who enjoyed two EuroLeague triumphs with Olympiacos in his time with the club, said after the game that he hoped the win would help propel the team to more consistent form.

"This is a very important win for us after a series of very bad losses," said the Serb. "We started the Top 16 with an unbalanced performance. It was also very important for us to win and get our rhythm back. I hope this win will help us start recovering; I think my team displayed real character on defense. This is the potential that we have as a team, and it's good to prove that. Our performance on pick-and-roll was the key for us to win the game."

Dontaye Draper was Efes's star man on the night, scoring 13 points and going four for four from behind the 3-point line, although the win could truly be chalked up to a team performance with four players scoring in double figures and only one player failing to score a point while the whole team shot 50 percent from 3-point range. Their defining basket came with Efes in control halfway through the fourth quarter with a 12-point lead. Dario Saric drew a double team in the post before flinging the ball out to Matt Janning on the 3-point line. With the defense scrambling, Janning flicked the ball to Cedi Osman who drew the last defender before passing to Thomas Heurtal for the widest of wide open 3-pointers.

"I think we did a great job of stopping a great team like Olympiacos in the second half," said Draper. "We had energy on the floor, then we had some great shots to break the balance. It was a great team effort. I congratulate my teammates fort this great victory, but we still have lots of things to do."

Olympiacos coach Giannis Sfairopoulos was gracious in defeat although he blamed his team's lack of mental fortitude for the defeat.

"First of all, I want to congratulate Anadolu Efes for their win," said Sfairopoulos. "They played really great in the second half and deserved to win. We challenged well in the first half, but we were not able to find our rhythm in the second half and then we mentally broke down. We lost the team chemistry and turned in to a different character of our own; we lost the rhythm both on defense and offense. Anyway, we will keep on trying our best to reach the playoffs."

Efes can improve their record next week when they take Emporio Armani Milan, a traditional powerhouse who are a distinctly beatable team this season, while Olympiacos face a tough test against unbeaten CSKA Moscow.