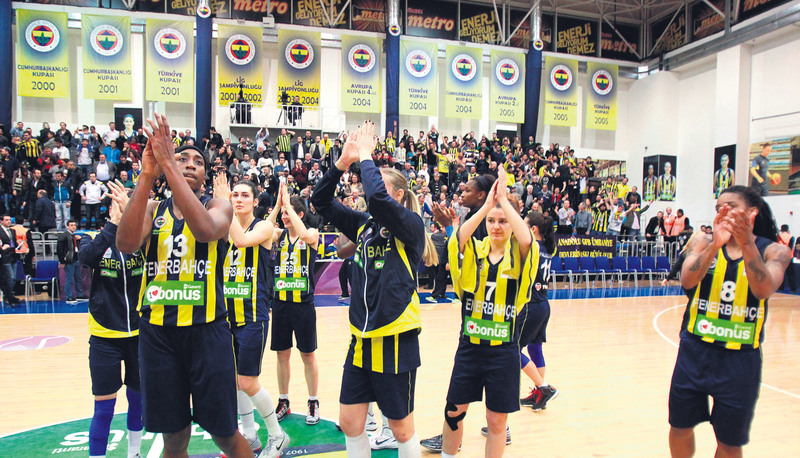 by Daily Sabah Mar 05, 2015 12:00 am
Quanitra Hollingsworth came up with the big block at the buzzer as Fenerbahçe clung on for a 58-56 victory against rivals Galatasaray in Game One of their EuroLeague Women quarter-final on Tuesday. The repeat of last season's final lived up to its billing as the reigning champions fought back from 16 points down to enter the final 30 seconds tied, despite trailing since the first minute. But Jacek Winnicki's side kept their cool to leave the Metro Energy Sports Hall with a series lead, ahead of Friday's Game Two. The hosts jumped out to the early lead by creating consistently high-percetange shots, but an 11-point third quarter for Nevriye Yılmaz hauled Galatasaray back into contention heading into the final stanza. Sancho Lyttle struggled to get going all night, but one of her two made field goals tied the game with 2:21 remaining. As the intensity increased, so did the number of errors, and nearly two scoreless minutes followed, before Shavonte Zellous showed the swift hands to pick Lyttle's pocket, drawing a foul and converting both foul shots with 24 seconds to play. Having seen Lyttle falter, coach Ekrem Memnun looked to Jelena Dubljevic on the next possession, and although the Montenegrin missed, she corralled the rebound and was sent to the line. But Dubljevic only split the pair, and with five seconds remaining, the visitors were forced to foul Tina Charles, and she too hit one of two. This left Galatasaray a shot for the win, and while they found the hands of Kelsey Bone at the second attempt, her effort was swatted away by Hollingsworth. It capped a strong performance for the Turkish international, who finished with 14 points and 10 boards, as Zellous added 13. Yılmaz finished with a game-high 18 points and Dubljevic contributed 14, although it will be the potential 15th that will play on her mind.