Russell Westbrook is a man on a mission codenamed: Winning 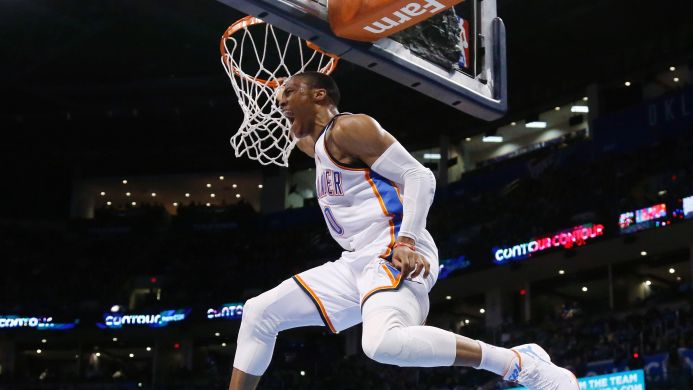 
Russell Westbrook became the first player to have four straight triple-doubles since Michael Jordan had seven in a row in 1989. The All-Star MVP scored at least 40 points for the third straight game. Westbrook wore a mask and a headband for the second straight game after breaking his right cheek on Friday in Portland. He had surgery on Saturday and sat out Sunday against the Los Angeles Lakers.

The mood was somber in the Portland Trail Blazers' locker room after their 94-75 victory over the Dallas Mavericks. The win came at a cost, with Wesley Matthews lost for the NBA season because of a ruptured Achilles tendon.

"I make that same cut hundreds of thousands of times in my life," Matthews said. "I felt the initial pop. And you guys could probably tell on the replay. I looked back it feels like someone's kicked you. I was praying. I was praying someone was back there."

In the only other game, the Chicago Bulls rallied to beat the Oklahoma City Thunder 108-105, ending Russell Westbrook's triple-double streak at four.

LaMarcus Aldridge had 17 points and 12 rebounds as the Blazers pulled away in the second half for for their fifth straight victory.

But shortly after came the news about Matthews, who started every game this season. Matthews was averaging 16.1 points and 3.7 rebounds.

"It's tough, man. He's the heart and soul of this team, he brings a lot to this team," Aldridge said. "I've played with him seven, eight years now, so not having him out there is going to be tough."

Nicolas Batum added 15 points and a season-high 12 rebounds for Portland, which had four players in double figures despite coming off back-to-back games.

Monta Ellis and Amare Stoudemire each had 12 points for the Mavericks, who saw the return of veteran center Tyson Chandler after a three-game absence.

Chandler, who was out with a left hip injury, finished with four points and 14 rebounds.

In Chicago, when E'Twaun Moore hit a go-ahead 3-pointer with 2.1 seconds left to put the Bulls up 107-105, Westbrook stepped out of bounds after taking the inbounds pass, not seeing that Serge Ibaka was open for a potential tying shot.

"Just trying to get a good shot. I should have passed to Serge," Westbrook said. "That was a bad decision on my part. He was open and I should have hit him."

Westbrook had 43 points on 14-of-32 shooting and added seven assists and eight rebounds. On Wednesday in Oklahoma City, he had career highs with 49 points and 16 rebounds and added 10 assists in an overtime victory over Philadelphia.

Ibaka had 25 points and nine rebounds for Oklahoma City.

"He's not happy that he scored a bunch of points and got a bunch of rebounds and assists and we lost the game," Thunder coach Scott Brooks said. "Russell is about winning and about winning only."
Last Update: Mar 06, 2015 11:34 pm
RELATED TOPICS