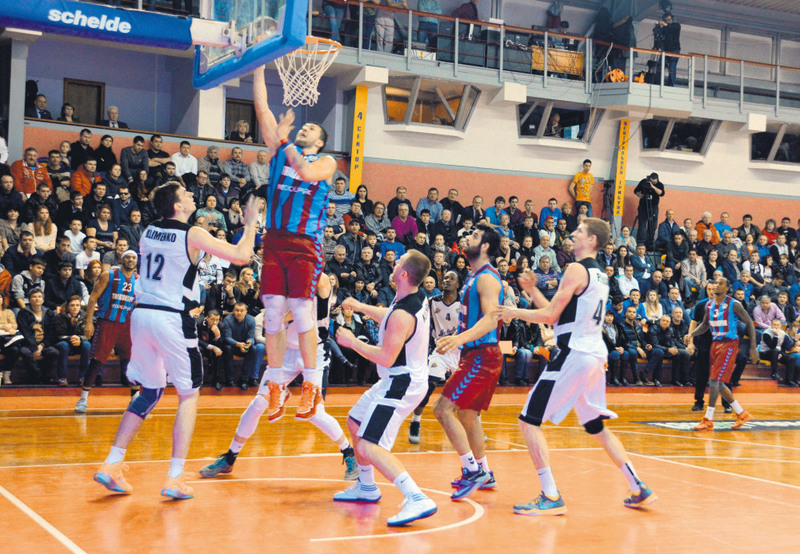 by daily sabah
Mar 14, 2015 12:00 am
Trabzonspor Medical Park put up triple figures as they waltzed into the Final Four of the EuroChallenge with a 100-73 road win over Avtodor. Trabzonspor, who improved to 13-1 in the competition, underscored their credentials in the class of the EuroChallenge field with yet another dominant display, outscoring their hosts 28-6 in the second quarter to effectively lock up progress long before the finish. Dermarquis Bost had 17 points with Dwight Hardy adding 16 for Trabzonspor, who shot 34 for 67 (50.7 percent) from the field, including 12 for 26 (46.2 percent) from 3-point range, as they wrapped up a 2-0 result in the quarterfinal tie. Jeremy Chappell opened the night with a 3-pointer for Avtodor, but Trabzonspor took the lead 91 seconds in and never looked back - immediately reeling off nine straight to go 13-5 up on Hardy's lay-up. Novica Velickovic finished with 14 points for Trabzonspor with Sean Marshall adding 13. Kyrylo Fesenko led Avtodor with 17 points and 10 rebounds, with Micah Downs adding 15. Fortson collected nine points, six rebounds and 11 assists. Elsewhere, Crvena Zvezda Telekom Belgrade led from start to finish en route to a 68-91 victory over Galatasaray Liv Hospital Istanbul at Abdi İpekçi Arena on Thursday. The victory lifted Zvezda to 3-7 as well as out of a tie for last place with Galatasaray, which fell to 2-8.
Last Update: Mar 14, 2015 2:26 am