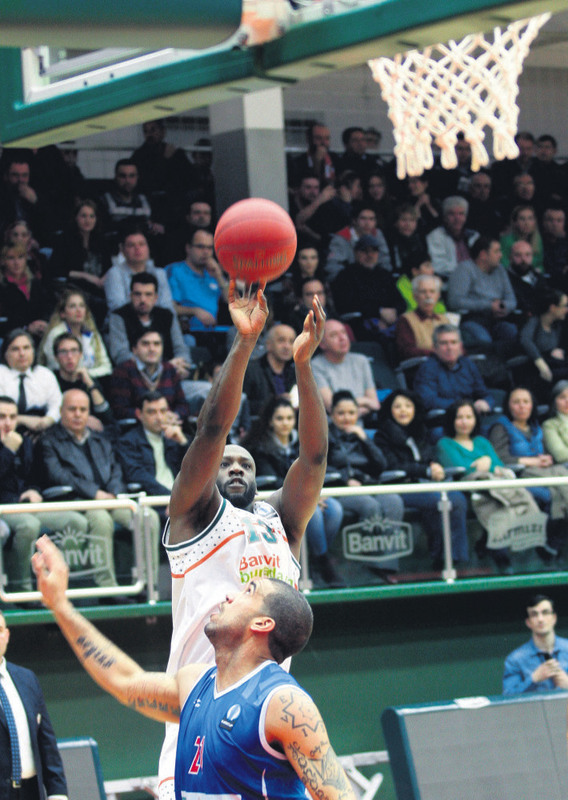 Banvit Bandırma defeated Paris Levallois, 75-71, in the quarter-finals, winning the first semi-finals ticket of the Eurocup campaign. The victory earned the Turkish team a spot in the Eurocup semi-finals for the first time in the club's history

The first Eurocup semi-finals ticket was awarded to Banvit Bandırma on Tuesday. Sammy Mejia starred with seven of his game-high 18 points in the final 30 seconds to lead Banvit Bandırma to a 75-71 victory over Paris Levallois and a spot in the Eurocup semi-finals for the first time in club history. Paris had won Game 1 of the two-game, total-points quarter-finals series 65-67 a week earlier and kept its chances alive until the final seconds, but Sammy Mejia hit seven points in the final 30 seconds to lead Banvit Bandırma to victory. Mejia's free-throw shooting helped the home team prevail. Mejia also collected nine rebounds for the winning side, while E.J. Rowland added 16 points. Mike Green paced Paris with 16 points and nine assists. Giovan Oniangue and Dionte Christmas netted 13 points apiece and Sharrod Ford scored 10 in defeat. Banvit's early 10-0 run threatened to make it a one-sided game, but Paris came back to make it 34-32 at halftime - tying the series at 99-99. The teams then remained close for the rest of the night. Banvit held slim advantages in the fourth quarter and though Paris rallied, they fell just short.

Things went well for the hosts from the start. Keith Simmons scored the game's first basket before Oniangue tied it at 2-2. Then four Banvit players scored in a 10-0 run. Maleye Ndoye's steal and layup helped Paris fight back and Oniangue free throws cut the gap to six in the game and four on aggregate, but a Mejia triple ended the first quarter at 17-8. Oniangue sank a pair of 3s to keep Paris in the hunt, but Vladimir Veremeenko scored twice as Banvit remained in charge. Blake Schilb connected from downtown to make it 23-17. Paris's next 3 came from Landing Sane, who cup the gap to five in the game and three on aggregate. Mejia and Simmons scored to put the hosts back in control. Green made three foul shots over two possessions and Sane sank a second triple to trim the gap to 31-28 with a little less than two minutes left in the half. Schilb picked off an errant Rowland pass, which resulted in two free throws by Green and an aggregate lead (96-97) for Paris. After a timeout, Jimmy Baron drilled a triple, but Ford's dunk made it 34-32 at halftime.

Oniangue's third 3-pointer of the night tied the game at 37-37. A 3-point play by Veremeenko and a triple by Can Maxim Mutaf put the hosts up 49-41, but Dionte Christmas's free throws narrowed the gap to 49-45 through three quarters. Şafak Edge and Christmas traded 3s to start the fourth quarter. Christmas scored again to make it 52-50 - and tied on aggregate. Baron put the hosts back up by six, but a pair of buckets by Ford brought the visitors within 59-56 with four minutes remaining. Rowland sank a clutch 3 that put his team back up by six for the game and four in the series. Ford fouled out and Green split free throws as Paris started to fall back. Dragicevic's free throws put 66-59 on the board with 1:52 to play. Green made three free throws with 41 left to give Paris hope at 68-62 - down four on aggregate. Mejia did not miss from the line for the hosts, but Christmas made a four-point play with 20 seconds left to bring his team within two in the series. Mejia was again perfect from the line; Green matched him. Mejia returned to the line with eight seconds on the clock and made both shots. Green made a triple with three seconds left to bring Paris within one on aggregate. Mejia made one more free throw with two seconds left and Schilb's prayer from beyond halfcourt to win it at the buzzer missed. Eurocup Basketball, also known as the ULEB Eurocup, is the second-tier basketball league in Europe, one level below the Euroleague.
Last Update: Mar 26, 2015 10:36 am
RELATED TOPICS