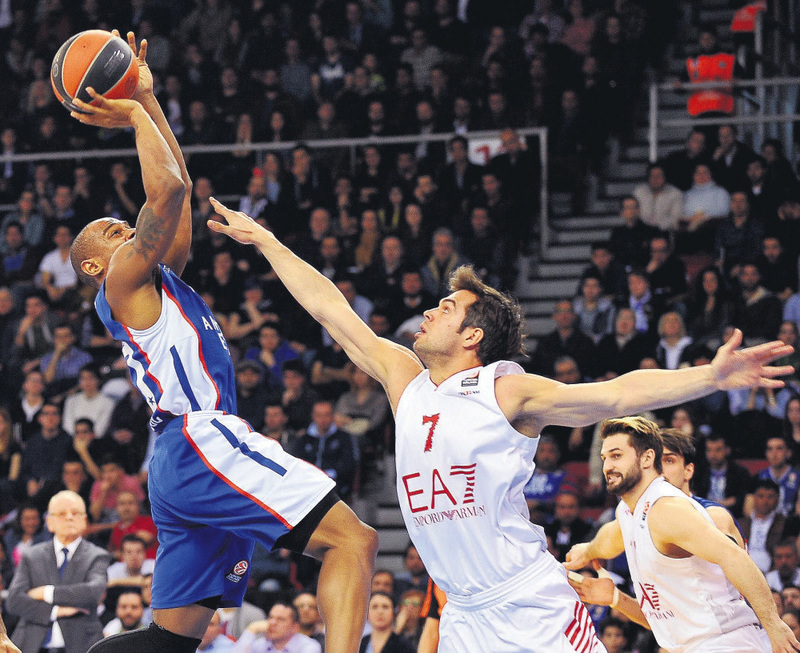 by Kenny Laurie Apr 06, 2015 12:00 am
Thomas Huertel took the time to credit his teammates after his astonishing performance helped Anadolu Efes to an 86-78 win over EA7 Emporio Armani Milan.

The win keeps Efes's fate in their own hands as they enter the final week of the Top 16. Fenerbahçe lie in wait for Efes who are battling Laboral Kutxa Vitoria for the last playoff spot in Group F.

A defeat on Friday could have been potentially catastrophic for the chances of advancing. A defeat looked on the cards in the first half when Efes started extremely slowly, allowing the visitors to take a 24-13 lead. That lead would be stretched to 30-15 at one point before Efes had something of a tiny revival to make the score 42-36 by the halfway mark. With Efes still trailing, winter-signing Huertel put in an inspired run of play that led to a 12-0 run that stretched over the third and fourth quarters. The Frenchman hit remarkable shot after remarkable shot on the way to his 22 points to lead Efes to a valuable win.

Despite Huertel's heroics, the Frenchman was humble in victory and pinpointed his teammates for praise. "This is a very important win for us to keep our chances alive in the group," said the point guard. "We started the game badly. Maybe we were a little bit nervous. But we balanced the game in the second half with good defense. And then good defense fired up our offence. I'm happy to help the team in any way. I also want to congratulate my teammates for their great effort."

Hurtle wasn't the only person to single out other performers. Coach Dusan Ivkovic praised Nenad Krstic, who also had 22 poin

ts, as well as Donate Draper, who had a rare scoreless game but found a myriad of ways to contribute.

"We had a well-deserved win tonight against EA7 Emporio Armani," Ivkovic said. "It was a very tough game to play for both sides and it was hard as we expected. In the first half we didn't perform well. Maybe it was because of the pressure of the situation in the group. Our opponent also made everything tough for us. But in the second half, we showed our desire to win the game. Thomas Huertel and Nenad Krstic had great games. Dontaye Draper didn't score but he also made five assists and stole the ball twice without making any turnover. He was excellent in defense, and this was the key for the win."

Efes, who are now 6-7, will play Fenerbahçe on Thursday in a hotly-anticipated game between Istanbul rivals, one of whom is fighting for the title of Group F winners while the other looks for an extension in this year's EuroLeague.
Last Update: Apr 06, 2015 2:21 am
RELATED TOPICS