Efes miss their chance in away loss 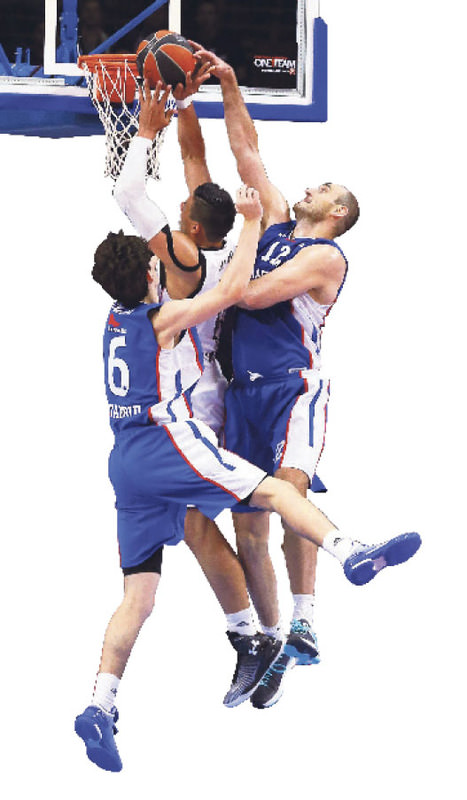 Despite taking a commanding first-half lead in Madrid, Efes fell to Real who came back with a strong third quarter. The two sides meet again tonight

Anadolu Efes missed the chance to snatch an away win over Real Madrid on Thursday night, giving up an 11-point lead before falling to an 80-71 defeat.

In the best of five series, Efes will have to grab at least one win in Madrid to stand a chance of progressing - they are without the home court advantage after finishing fourth in their Top 16 group - and they let a perfect chance slip through their fingers on Wednesday night.

The Istanbul side took an eight-point lead into the half but a dominant third quarter from the hosts saw Real Madrid win the third period 26-10 and wrest control of the game.

Madrid's inspiration came from relatively unlikely sources with former Atlanta Hawks forward Gustavo Ayon getting a double-double with 14 points and 10 rebounds while KC Rivers had a career-high 21 points, hitting six of his seven 3-point attempts.

Efes Coach Dusan Ivkovic praised Madrid's dynamic duo and conceded that despite his side's superb first half, Real Madrid were the deserving winners.

"Real Madrid was the fair winner tonight," Ivkovic said. "The game had two very different halves. We worked very well in the first half against one of the best offensive teams in Europe, and maybe my team got scared in the second half. We had a lot of turnovers while Ayon and Rivers - to me, the great surprise of the series - handed us this loss. We have to learn a lot from this game and we will have another chance to play good basketball on Friday."

Efes were led by young star Dario Saric and Cedi Osman, who had 13 and 11 points, respectively, in a strong team performance. While Dontaye Draper had one of his quieter games, scoring just six points, the American believes that Efes showed enough on Wednesday night to at least take the series to Game 5.

"We want to compete in these playoffs, it is the least we can do," Draper said. "It will be a very long series and it was a tough game tonight, but this just got started. I think we may even go to Game 5. We will have another opportunity to fix some of our mistakes, which we made against one of the best teams in Europe, on Friday."

Although Real Madrid are heavy favorites for the series win, Efes do have a history of beating Real Madrid having overcome them with a last-second Matt Janning basket back during the EuroLeague regular season. Madrid coach Pablo Laso is well-aware of how difficult it will be to overcome the Istanbul side.

"We managed to get a win in a game that was difficult for us from the beginning," Laso said. "We didn't have good rhythm in the first half. We were always trailing them on defense and offense, doing everything a second late. We took a lot of shots in the first half, but didn't work on them. We were much more focused on defense and offense in the second half, controlling other aspects that escaped us before like rebounds. That allowed us to play better and win Game 1. It is tough to win these games, but is logical - these are the EuroLeague playoffs. A 1-0 lead is a good start, but there is a long way to go."

The two sides meet again today in Madrid for Game 2.

Separately, Barcelona never looked back after a 17-2 run gave the Catalan giants a 22-8 lead early in the second quarter as they dominated a subdued Olympiakos in all departments.

Barca nailed 10 three-pointers from 21 attempts against only six of 22 by their rivals and collected 44 rebounds, 17 more than the Greek side. Not a single visiting player finished in double-scoring digits while the competition's all-time leading scorer Juan Carlos Navarro and Slovenian forward Bostjan Nachbar netted 10 each at the other end.

"We are very happy to have made the first step but it will be a more difficult match on Friday and we will have to prepare ourselves for a different game of basketball," Barcelona's Polish centre Maciej Lampe told Euroleague television.