Efes ‘scared' as they lose another big lead 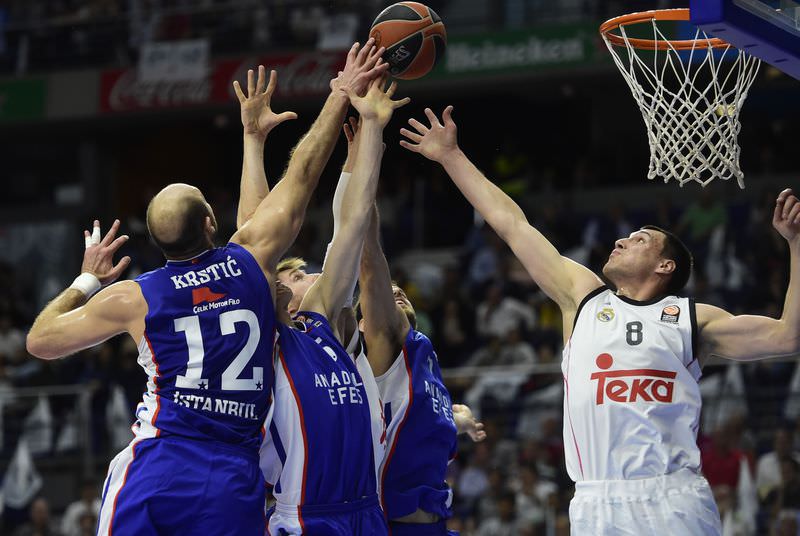 Anadolu Efes once again let a big lead slip in Madrid as they went down 2-0 in their quarter-final playoff series with Real Madrid.

The Spaniards eventually won 90-85, but as in Game 1, Efes dominated much of the proceedings and will again feel aggrieved at not coming away with the win.

Efes now have to win all three of the remaining games in the best-of-five series to go through. The next two games will be played in Istanbul before the side potentially fly back to Madrid for Game 5, should they win both home games.

On Saturday night, the Istanbul side had a sequence of runs that eventually led to a 17-point lead in the third quarter. Real Madrid hit back as they did in Game 1 and were able to trim the lead down to just three points by the end of the third quarter. Efes hung tough in the final period and were ahead going into the last 45 seconds. Felipe Reyes hit a huge 3-pointer with 43 seconds left for Real before Stratos Perperoglou then turned the ball over in a crucial possession, essentially handing the hosts the game.

Thomas Heurtel was in blistering form for Efes, scoring 16 points and handing out 15 assists, with the assist total setting a new record in EuroLeague playoff games. Efes coach Dusan Ivkovic called the performance "one of the best this season" while expressing his disappointment at not being able to cap Heurtel's star showing with a win.

"We played one of our best games this season," Ivkovic said. "It was not enough in spite of Heurtel's big game. For us, our goal is try to tie the series at 2-2 and bring it back to Madrid."

Heurtel himself was clearly disappointed with the result but the Frenchman said the narrow losses in Game 1 and 2 demonstrate that Efes can tangle with the best sides in Europe. He then put the result down to Efes being "scared." "I am disappointed. It was a good game," Heurtel said. "We played a good game on a good night ... we showed that we can beat one of the best teams in Europe. But in the last quarter, we were scared and we made many turnovers. In Turkey, it is our last chance. With our fans, it will be different."

The game was nothing if not a feast for the neutral with both sides taking it in turns to go on an exhilarating run.

Madrid took control early with a 9-0 charge. Efes responded with 14 unanswered points and led 37-45 at halftime. The visitors pushed the difference to 17 in the third quarter, but Madrid rallied to finish the quarter down three. After Madrid took the lead, Heurtel had three assists in a 0-7 push that put Efes up by seven points. It was 75-82 with a little more than two minutes to go, but Madrid scored the next 11 points to take control and Sergio Rodriguez iced the game from the line.

"It was a great game for our fans. Spectacular," said Real Madrid coach Pablo Laso. "We started well, everything was under control, but in the second quarter we lost control. We could not dominate the offensive rebounding. We overcame a 17-point deficit with heart, pride, the crowd helping us, tactical changes ... everything to sum up. We are Real Madrid. We showed who we are tonight. We have just one victory to go."

Game 3 will be played at the Abdi İpekçi Arena on Tuesday.
RELATED TOPICS