Can King James put out the torch of Curry? We're about to find out 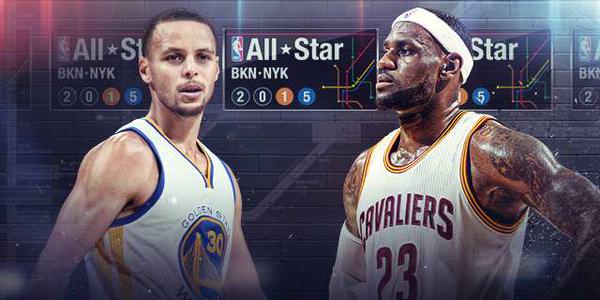 by French Press Agency - AFP
Jun 04, 2015 12:00 am
Sore, tired and hurting players have enjoyed the longest-ever break before the NBA Finals, but it's time to play through the pain again because there's a championship at stake.

The Cleveland Cavaliers, trying to end a 51-year title drought for their supremacy-starved city, face the Golden State Warriors, who have not won a crown in 40 years, in the best-of-seven series starting Thursday.

Each team has withstood the rigors of an 82-game season and three playoff rounds to put themselves on the brink of a long-sought prize, but both are bruised and battered as a result even with an eight-day break.

Cleveland guard Kyrie Irving will play despite left knee tendinitis and a barely healed right foot injury while Golden State's Klay Thompson has been declared fit after suffering a concussion last week, taking a knee to the head in the Warriors' finals-clinching win.

"There's not one guy in this series who is 100 percent," Golden State center Andrew Bogut said. "Just because we're not talking about it doesn't mean we're not all feeling something."

But he also knows the cure for what ails them all.

"Winning relieves everything," Bogut said. "One of those hoodoos is going to go out the window. There will be a celebration and a record broken either way."

Irving has had to summon the mental strength to keep going.

"It's an adjustment, but it's what it is at this point. I'm just going to go out there and will myself to play," Irving said.

"It's definitely tough because mentally and physically you want to be in line. Some of the things I'm thinking about doing mentally, your body just kind of stops and you catch yourself a little bit sometimes. You've got to get off the ball. But for me, it's just about finding my spots and seeing where I could be more effective out there for my teammates."

LeBron James, the four-time NBA Most Valuable Player whose dream of making his hometown Cavaliers champions is only four victories away, knows that the threat of Irving on the floor is something Cleveland need in order to have their best chance against a Golden State club that won a league-best 67 times this season.

"I can appreciate him just fighting through it," James said. "Whatever he can give us, it's going to be great for our team. Kyrie at 50, Kyrie at 60, Kyrie at 70 (percent) is better than Kyrie at zero.

"When Irving steps onto the court, he's a presence. And the defense has to be aware of him, has to account for him just because of his abilities to make plays.

"Any guy that is playing through injuries, I mean, we all are at this point, but he's dealing with something that's even more challenging, so you definitely commend him."

Irving missed two games in the Eastern Conference final due to injuries, but the Cavaliers were strong enough to sweep Atlanta to reach the finals.

"I just expect him to help the team in whatever ways he can," Cleveland's Iman Shumpert said. "If he's not 100 percent, then he's not, but that doesn't stop our goal. So pretty sure he'll push through the pain."

James adapted his game in Irving's absence, dropping to his knees in exhaustion after a game-three over-time victory.

"If everyone's not at full strength, he knows he has to raise his level," said Irving. "It's a mode that he goes into and it's just unstoppable."

Thompson said he expected to return for the Warriors in time for the opener and he went through the NBA concussion protocols to ensure he was ready.

"I was confident I was going to play," Thompson said. "I've been hit in the head before and I felt really good the second day. I had some nagging headaches that night, but when I got some good sleep and some good rest I was all right.

"But at the same time, it's not cool seeing your name in the headlines saying he's unsure, just because I want to play so bad."