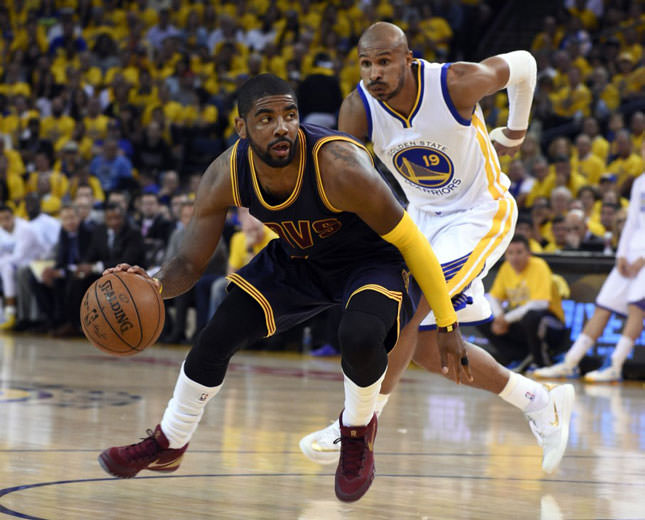 by Jun 05, 2015 12:00 am
Cleveland Cavaliers All-Star guard Uncle Drew or better known as Kyrie Irving will undergo an MRI exam Friday after suffering a worrisome left knee injury in a 108-100 overtime loss to the Golden State Warriors.

How quickly he can heal might well determine what chance the Cavaliers have of bouncing back to defeat the Warriors in the best-of-seven NBA Finals starting with game two on Sunday. Irving scored 23 points and contributed seven rebounds, six assists, four steals and two blocked shots for the Cavaliers in more than 43 minutes on the court before falling to the court in pain with 2:23 remaining in overtime as he tried to dribble past Golden State defender Klay Thompson.

After limping off the court and grimacing in pain on his way to the locker room, Irving left the arena on crutches and admitted the latest injury did not feel the same as the left knee tendinitis from which he had just recovered.

"It was a little bit different than what I had been experiencing," Irving said. "Totally different than other times. I don't know what I felt but obviously it didn't feel right. This is a setback." Repeatedly noting how different the injury felt than his prior pains, his voice trembling with concern, Irving said, "You can hear in the tone in my voice I'm a little worried."

So are his teammates, with superstar LeBron James saying Irving's injury was even harder to take after players had seen how hard he worked to come back. "It was very tough to see," James said. "I just see how hard he worked these last eight days just to get himself to play at this level. Seeing him walk out of the locker room on crutches just now, that's a tough blow for our team."

Irving had delivered a key play in the last seconds of regulation time, rushing up from behind to deflect a go-ahead layup attempt by Steph Curry.

"It's tough," said Cleveland guard J.R. Smith. "You don't like to see anyone get hurt, but someone like Kyrie, it's disheartening."

Team physicians will evaluate Irving on Friday and exam him as well.

"I want to make sure everything is OK so I'm going to take the necessary steps in order to see what's going on," Irving said. "I hope it's a reaggrevation of what was originally going on."

Irving had overcome nagging right foot and left knee injuries that forced him to sit out for two games against Atlanta in the Eastern Conference final. "Coming in I felt amazing," Irving said, adding that now he was "a little disappointed, a little frustrated." Irving has averaged 18.7 points and 3.7 assists a game in the playoffs after averaging 21.7 points and 5.2 assists during the season.
Last Update: Jun 06, 2015 1:14 pm
RELATED TOPICS