LeBron carries the Cavs to tie the Finals against Warriors 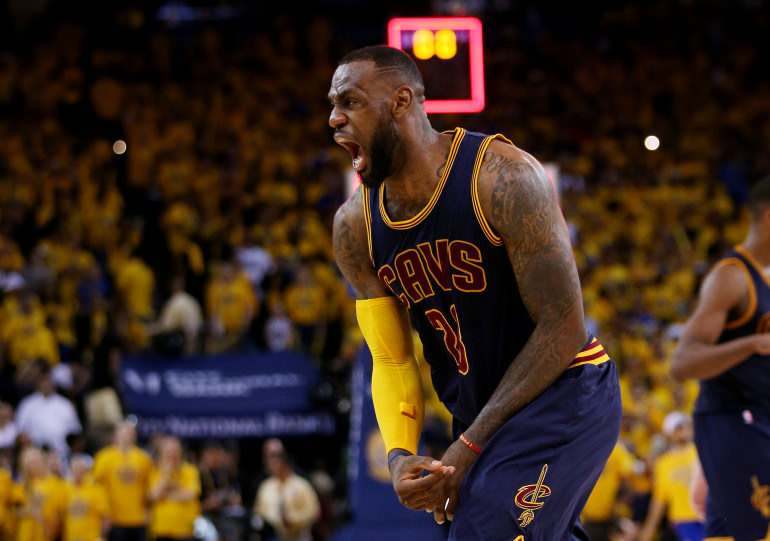 by Associated Press
Jun 08, 2015 12:00 am
Once LeBron James tied up the NBA Finals with another one of his virtuoso postseason performances, his legs were in knots.

He needed ice, treatment and rest. He wasn't the only one.

After a pair of entertaining, exhausting, drama-filled overtime games at Golden State, everyone players, fans, even the refs needed a day to take a breather and recover before the Cavaliers and Warriors resume a series getting stellar TV ratings and shifting to Quicken Loans Arena for Game 3 on Tuesday night.

As midnight approached in California following Cleveland's stunning 95-93 OT win on Sunday night, James, who scored 39 points with 16 rebounds and 11 assists, grimaced as he lifted himself from a chair on the postgame interview dais. He was hurting after playing 50 methodical minutes, one game after going 46.

James, incredibly, believes he can give more.

"It's a maximum of five games left in the NBA season," he said. "So I'm ready for whatever."

He has been all season.

With James leading the way, the Cavaliers, who were already a heavy underdog before losing All-Star guard Kyrie Irving to a broken left kneecap in the opener, dragged down the Warriors and Stephen Curry, the league's MVP.

Hounded by Cavs guard Matthew Dellavedova, who seemed to be inside his jersey, Curry missed 18 of 23 shots and ended his night with an uncharacteristic 3-point air-ball with four seconds left in overtime.

But while Dellavedova's contributions starting in place of Irving were huge, James was again the difference and the reason why the Cavs can't be dismissed.

The best all-around player of his generation, James has pushed a team missing two All-Stars Irving and Kevin Love and a franchise that has its first finals win, within three victories of an improbable title that would end Cleveland's 51-year major sports championship drought.

James hasn't been flawless, far from it. He's twice missed potential game-winning shots in the final seconds, and has made only 40 percent of his field-goal attempts.

However, he's dictating the pace of the game, controlling the clock and slowing the run-and-gun Warriors, who are accustomed to doing things their way. He's also motivated his teammates James dubbed them "The Grit Squad" by telling them that they not only belong in this series, but they can win it.

The Cavs may be underdogs, but James is reminding them that this is their moment. And as he chases his third title, one that would crown his brilliant career and help him make good on a promise to his home area, James has the Cavs savoring every step.

"We have a chance to be a part of history," he said.

"You'd be hard pressed to find a guy anywhere, anytime, I can think of a name or two, but that's the whole history of basketball, that can give you the kind of all-around performance and all-around leadership that LeBron does for his group," he said. "He really willed his guys to win that game.

"That's what a champion does."

James is averaging 41.5 points, 12 rebounds and 8.5 assists in his fifth straight finals. He's drawn inspiration from doing it without Love and Irving, proving his doubters wrong and the 30-year-old suggested that there is "other motivation" driving him.

Maybe it's a chance to outperform Curry, tagged by some as his heir apparent as the league's biggest star.

Curry was off the mark from the start in Game 2, and afterward he didn't have an explanation for going 2 of 15 on 3-pointers. Warriors coach Steve Kerr isn't worried about his superstar.

"It happens to everybody, whether you're the MVP or a role player," Kerr said. "Sometimes the shots don't go in. Sometimes things don't go your way. Steph will bounce back. He's a great player. We'll help him. We'll try to see if we can get him into a better groove. But he'll be fine."

The workload on James has been overwhelming, maybe even too much for him. He's as mentally focused as he's ever been, and heading into the finals, James acknowledged his game is at its pinnacle.

He's dug deep to make it through two games, and he may be forced to play 40-plus minutes per game from here on out.