Ataman overcoming injuries and bringing through youngsters at EuroBasket 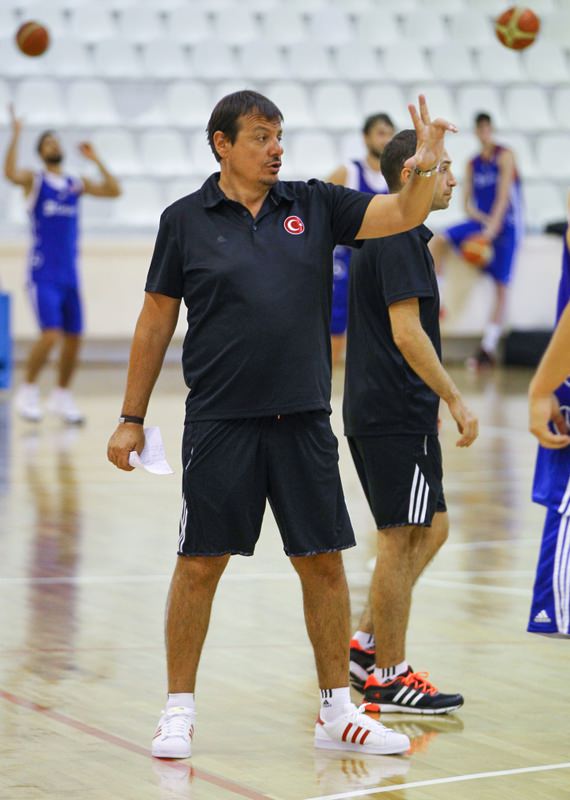 With Turkey set to play three crucial warm-up games in Istanbul this week, Ataman spoke to Daily Sabah about plugging gaps and what's best for the next generation

A coach really earns his money when he has to adapt to adverse situations. Ergin Ataman is currently trying to create a side that can navigate an almost cruel group in EuroBasket 2015 - taking on Spain, Germany, Serbia and Italy - without his star player and defensive anchor Ömer Aşık.

Ataman has already been outspoken over the center's injury, claiming the NBA doesn't care about international tournaments, but his words don't matter when his side is preparing for the EuroBasket shorn of their leader, their most experienced player and they're most irreplaceable player.

On top of his woes, Ataman is also without Emir Preldzic, a point forward whose ability to score in the clutch created some of the most memorable moments at last year's World Cup.

Turkey return from their camp in Italy this week to take part in three friendly games at the Abdi İpekçi Arena as they warm up for the tournament.

Turkey take on Bosnia-Herzegovina tomorrow before going up against Tunisia on Friday and Greece on Saturday.

Their first camp in Çeşme gave the players the chance to get to know one another and enjoy time with their families, something Ataman believes to be important as the players have a huge set of sacrifices ahead of them. After a camp in Italy to work on their physical conditioning and tactical strategy, the Ataman Army is back in Istanbul to see how much preparation they still have left to do.

Ataman is a man not known for being short on confidence, and speaking to Daily Sabah, he explained how his depleted and inexperienced side can overcome the might of Spain, Italy, Germany and Serbia.

Although Aşık's injury is clearly a tough one to swallow for Turkey, Ataman is at least comforted by the level of depth in the squad, with Ataman able to call on former Cleveland Cavalier and Boston Celtic Semih Erden to replace the New Orleans Pelicans center.

"Omer was very important to our defensive strategy," Ataman told Daily Sabah. "He is one of the best defensive centers in Europe and the NBA. Now we will have some problems in defense, but we will try to recover from this particular change. We do also have experienced players like Semih Erden, Oğuz Savaş [and] Furkan Aldemir - three very experienced players who have played in the NBA."

Ataman has resisted the temptation to try adopting a more cavalier approach after losing his influential, if lumbering, center. In the face of injuries to defensive anchors, coaches have a habit of speeding up the play, creating more possessions and playing with significantly increased spacing to make up for the defensive shortfall. However, Ataman plans to simply replace Aşık with Erden, asking him to do the same rim protecting, screening and rolling. A settled side like Turkey's needn't rip up the playbook to facilitate one injury.

"Of course, Aşık is a very important player for us," Ataman said. "We are talking about a player who started 76 games in the NBA last season and playing about 25 minutes a game. We will try to recover the situation with Erden, who has had some problems and missed out on the World Cup last year. Now we look to him and Savaş and Aldemir."

The side Ataman is taking to EuroBasket 2015 is one of extremes when it comes to experience. While Savaş, Aldemir, Erden, Ersan İlyasova and Sinan Güler have just about seen it all in Europe, internationally and the NBA, the squad is packed with young talent that has barely even popped through to the starting ranks of their club teams. Only Bobby Dixon, a naturalized player who helped Pınar Karşıyaka to the Turkish title this year, can confidently claim to be in the prime of his career, despite being in his early 30s. Capitalizing on the success of Turkey's youth teams, Ataman is hoping that his youngsters will gain the valuable experience that Cedi Osman picked up at last year's World Cup. Ataman is one of Osman's biggest fans, making him a surprise inclusion and regular contributor at the World Cup last year. Osman's trajectory is the perfect example for the likes of Furkan Korkmaz, Kenan Sipahi, Emircan Koşut, Kartal Özmızrak and Akif Egemen Güven, all of which are currently 20 years old or younger.

Koşut and Güven especially have the chance to make a splash as big men, potentially helping to plug the gap left by Aşık.

"I think this is very good that last year Osman played 16-17 minutes in the World Cup, this year he played regularly for Efes in the EuroLeague and now of course he will be one of our starting players," Ataman said. "He will be one of the next players coming through, which is important because we have some good players coming through. Also, I think Cedi is very good for our young players. It is not important that he is young and experienced; it is his intensity and attitude that is important, and I think this year some other young players will take part in the European championships."

Ataman has already predicted that at least three of the youngsters will go to the EuroBasket. The experience could prove invaluable for the future of Turkish basketball as well as the careers of the individuals.

Furkan Korkmaz and Kenan Sipahi have especially already been building a reputation that is likely to one day take them to the NBA, a move that helps Turkey in the long run as well as now, providing inspiration for the next generation. Although Ataman encourages his players to go to the U.S., he believes, again, that following Osman's path is the best course. Osman was recently drafted by the Cleveland Cavaliers and has already revealed to Daily Sabah that he will move stateside in two years once he has gained more experience in Europe. Ataman backs the strategy, believing it to be better than the route many take to the NBA where they move as teenagers and then struggle to progress as time on the court becomes scarce.

"I think the quality of the player is important but it is important to have a career in Europe before the NBA," Ataman said. "To go to the NBA on talent alone is a problem for these guys. For example, Cedi Osman is maybe the most talented player in Europe at his age. He made a very good choice to stay at Efes to continue to play in the EuroLeague, and I think after one or two years if he goes to the NBA as a real young EuroLeague veteran then he will be different. I don't like the idea of players going to the NBA without having gained experience in European basketball."

While injury may have robbed Turkey of some of its most valuable players, the tournament could well go down as the time when its youngsters made the crucial step forward.
RELATED TOPICS