Dixon wants to keep the ball rolling with Turkey 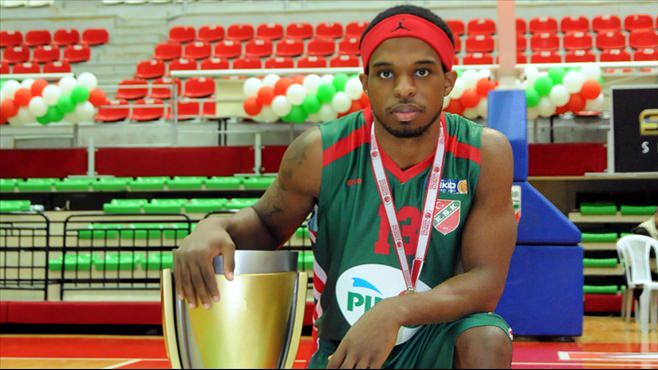 Coming off a championship- and MVP-winning season, Dixon told Daily Sabah that he wants his momentum to carry over into the national team's EuroBasket performance

After leading Turkey to a win in his first international game on home court, Bobby Dixon told Daily Sabah he feels better than ever and is in good shape to lead his adopted country at EuroBasket 2015.

The 12 Giant Men beat Bosnia-Herzegovina 66-58 in a comfortable win at the Abdi İpekçi Arena on Wednesday night as Turkey gear up for EuroBasket next month.

Turkey will take on Tunisia today in the same arena before returning to the same court 24 hours later to take on Greece, in a widely anticipated game against a historic rival, potential medal winner at EuroBasket and the country of one of the NBA's brightest young stars, Giannis Antetokounmpo - who has already served notice with a dominant display against Belgium in Greece's warm ups.

On Wednesday night, Dixon was the star of the show for Turkey, carrying his form over from his title-winning season with Pinar Karşıyaka - a performance that earned him a big move to Fenerbahçe.

Dixon was sharp and quick at the point of attack for Turkey and he believes his form and aggression should help Turkey at EuroBasket.

"I think it went pretty well," Dixon told Daily Sabah. "Everyone got to play and everyone looked healthy, and we won so it was a pretty successful game. That's why they brought me here because I'm aggressive and I like to play aggressively, that's one of the things I am. After coming off a season like that, obviously I feel pretty good. And going into EuroBasket, I feel good and am really looking forward to it. It's about playing with new guys, learning new things about the guys; we play a similar game to what I'm used to, and we just want to get out there and represent Turkey."

Turkey began the game as expected with Dixon - a newly naturalized player who enters the team on the back of a Turkish championship MVP - and Sinan Güler making a small but dynamic and experienced backcourt, while young Cedi Osman started at small forward. Semih Erden was at center in place of Omer Aşık while Detroit Pistons star Ersan Ilyasova took power forward duties. Bosnia were more short-handed, missing both of their NBA stars, Jusuf Nurkic and Mirza Teletovic.

Playing his first game for Turkey on home soil, Dixon was keen to impress early on, and that he did, nailing his first shot from downtown before pulling up for a 3-pointer immediately afterwards. With their starters in, Turkey comfortably controlled Bosnia, going 17-12 up but as the youngsters and substitutes came off the bench, Bosnia caught up taking the first quarter 20-19.

Young star Kenan Sipahi looked nervous with his first touches, committing a bad turnover on an entry pass and bricking a shot, but his pull-up 3 off Erden's screen settled the youngster, while Melih Mahmutoğlu was purposeful and aggressive, beating the defense with funky dribbles and smart floaters. The two led Turkey to hot start in the second quarter leading to a 28-20 lead on a 9-0 run. That dominance would sustain until Turkey went into the half with a 37-28 lead.

Turkey further stamped their mark on the game in the third quarter, outrunning and hustling the Bosnians with Osman impressive and aggressive. Erden provided the highlight of the quarter, rolling to the basket and diving to the rim with a big dunk. While Turkey's youngsters impressed, veteran and team leader Ilyasova was defensively lackluster and off the mark offensively, hitting less than 25 percent of his shots.

Using the game to work out of their offensive and defensive sets ahead of EuroBasket, Turkey still seemed somewhat rusty, occasionally being out of position for defensive rebounds while offense wasn't always as fluid and slick as possible.

Aside from a better performance from Ilyasova, the only thing the Turkish crowd - which made up roughly a third of the stadium - missed out on was seeing Furkan Korkmaz who is resting after playing a leading role in Turkey's U18 European Championships and U19 World Championships, tournaments where he picked up a silver and bronze medal, respectively. Korkmaz made the All-Tournament team in both events as well.
Last Update: Aug 14, 2015 2:28 am
RELATED TOPICS