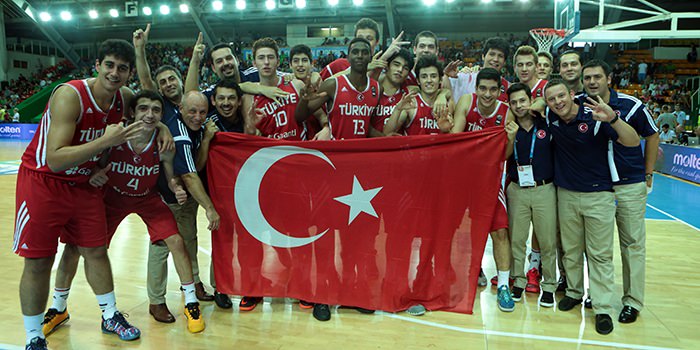 by Daily Sabah Aug 18, 2015 12:00 am
Turkey's U16 Men's defeated Spain 83-72 to capture the bronze medal at the Men's U16 European Championship on Sunday in Kaunas, Lithuania. Guard Onuralp Bitim scored a team-high 16 points, while center Ahmet Can Duran had 14 points and eight boards in the win. Turkey finished the tournament with a 7-2 record. "The bronze medal at the Men's U16 European Championship is another terrific accomplishment for Turkish basketball this summer," TBF President Harun Erdenay said. "I congratulate head coach Fatih Elbaş, his staff, and all the players." Çağatay Afşar opened the scoring with a jumper 45 seconds into the game, and Spain never took the lead. Elbaş's squad took a 35-28 lead into halftime and came out on fire in the third quarter, scoring 27 points in the penultimate period.

As a team, Turkey shot 47 percent from the field, and were even better from long range, shooting 48 percent from behind the arc. Alperen Kurnaz hit all four of his three-point attempts. He finished the game with 13 points.

Bitim and Duran were critical to Turkey's success throughout the tournament. Bitim was the tournament's second leading scorer, averaging 22.4 points per game. Duran was dominant in the paint from the start. He averaged a double-double (12 points and 12.1 rebounds) over the course of the tournament. Both were named for the All-Tournament Team in recognition of their stellar performances.

"This has been a historic summer for our men's youth teams, and I congratulate TBF Director of Sport Barbaros Akkaş and Men's National Team Youth Coordinator Nihat İziç on their success," Erdenay said. "In the years to come Turkish Basketball fans have much to look forward to."
RELATED TOPICS