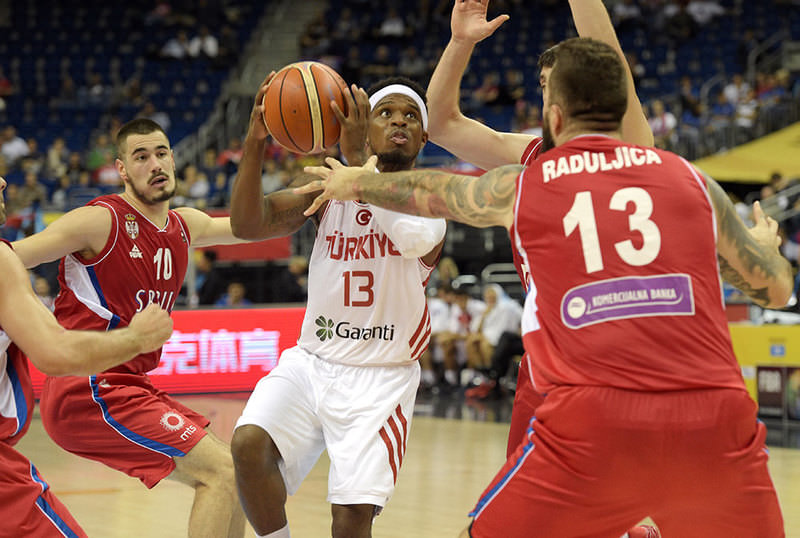 Serbia knocked down Turkey’s ‘12 Giant Men’ in the Eurobasket Group B game in Berlin yesterday with a score of 91-72, dashing the Turkish team’s hopes for climbing up the group ladder

Turkey lost any hope of becoming the point leader of Eurobasket Group B after Serbia defeated the '12 Giant Men' in Berlin. The Turkish team started out with a good pace and was tied with Serbia for three minutes, but Serbia was able to regain the momentum and ultimately take the victory.

Jumping out to a quick two point lead thanks to Ali Muhammed –formerly known as Bobby Dixon-Turkey was determined to halt Serbia's winning streak in the tournament but Serbia quickly recovered. In the opening quarter Markovic swooshed an early three-pointer while Ersan İlyasova and Ali Muhammed scored a couple of other stellar three-pointers. However, Serbia finished the period with a 30-14 lead despite baskets by Cedi Osman.

The second quarter opened with a three-pointer by Ersan İlyasova, but Serbia again controlled the game and cruised to a 53-35 half-time lead. Semih Erden, who was praised for his stellar performance in the match against Germany and was among the five best players in Tuesday's games, and Ersan İlyasova helped Turkey stay competitive throughout the game. Cedi Osman exhibited a good performance in the second quarter and reached ten points by the beginning of the quarter. Yet, Serbia finished the quarter with a 71-57 lead. An exhausted Turkey bowed down to Serbia during the fourth quarter.

Raduljica shined as he scored 20 points and grabbed 6 rebounds while Teodosic posted 17 points and 13 assists.

Quoted by the Turkish media, guard Sinan Güler said the team failed to recover after "personal errors in the start." He praised Theodosic and Serbia's teamwork.

This is the fourth consecutive victory for Serbia in Group B.

Turkey netted a 80-75 win against the host Germany on Tuesday, resulting in its second victory at the championship. Serbia dealt a blow to championship hopes of Iceland, a newcomer to the tournament with a 93-64 victory. Iceland is the next opponent for Turkey, which will play its first match against them after a 28-year break. If Turkey manages to beat Iceland, it will climb in the group rankings and qualify for the next round if Italy and Spain fail to secure wins.

In other groups, Czech Republic beat Belgium 66-64 in Group D in Riga. Belgium proved to be too challenging for the Czech team.