Turkey advances to knockout stage thanks to Spain's win over Germany 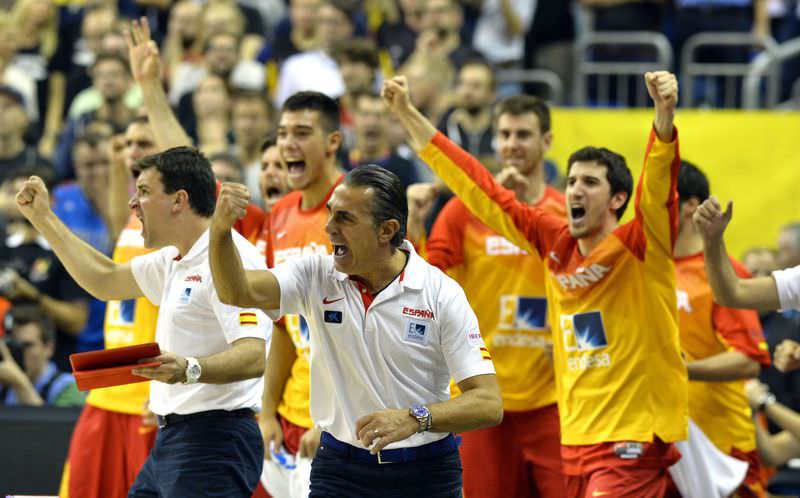 Spain survives Eurobasket collision with Germany, winning 77-76 on Thursday, the final day of Eurobasket 2015 preliminary round. Thanks to Spain's win, Turkey has also guarenteed to advance to the next round in 4th place in group B.

Germany (1-4) was eliminated and gave a rousing standing ovation to Dirk Nowitzki, who may have played his last match for his homeland.

Sergio Llull made four free throws late against Germany to secure Spain's victory. Dennis Schroeder could have sent the game into overtime but he made only two of three free throws with three seconds remaining.

Spain had what seemed a safe 10-point lead until Germany rallied late.

Nowitzki and Maodo Lo hit consecutive 3s to bring Germany within one with 23 seconds remaining.

Llull then made two free throws, so did Schroeder, and Llull hit two again. Schroeder went for a 3-pointer and got the call, but missed the last shot from the foul line.

Serbia finished the toughest group at the European basketball championship undefeated by beating Italy 101-82 and blasted organizers also on Thursday.

Guard Milos Teodosic had 26 points and eight assists as Serbia made sure of winning Group A with a perfect 5-0 record, with both teams heading to the knockout stage in Lille, France.

Serbia will take on Finland in the first knockout game on Sunday. Finland (2-3) finished fourth in Group A after losing 78-65 to Poland (3-2).

In a Group A game between two already eliminated teams, Russia salvaged some pride by defeating Bosnia-Herzegovina 81-61 in the 5th and final match.