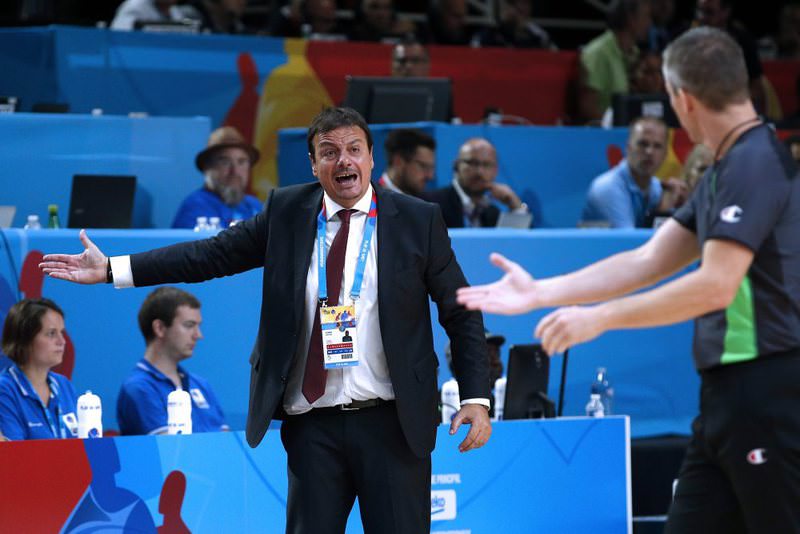 by Daily Sabah Sep 14, 2015 12:00 am
Turkey was disappointed after it had thrown in the towel at the 2015 EuroBasket Championship, and Turkish coach Ergin Ataman complained it was the organization that had failed. Defending champion France overwhelmed Turkey 76-53 before a record indoor crowd to make the European basketball championship quarterfinals on Saturday.

However, Ataman criticized the new, multi-country host system brought by FIBA. He said in a press conference after the game: "Because of the new system that was changed by the FIBA, we had to come to Lille by plane very late at night after the last group match. It was not fair to allow us only forty minutes training period before the match against France. The structure of the tournament was not good although the stadıum and fans were great. The Organization and the hotel were awful." The match set an attendance record for an indoor game broken with a sell-out crowd of 26,135, according to the organizers. The previous record was held by Red Star Belgrade, which drew 24,232 to the Belgrade Arena for a Eurocup quarterfinal against Budivelnik Kyiv. The previous record for a Eurobasket game was also set in Belgrade, with 18,900 fans watching the medal games in 2005. France will next meet Latvia, which beat Slovenia 73-66. Latvia won the first title 80 years ago, but its best recent placing was eighth in 2001.

Greece set up a showdown with Spain by beating Belgium 75-54 for its sixth win in as many games. Spain pulled away at the start of the fourth quarter to beat Poland 80-66. Greece is seeking its third Eurobasket title, and first in a decade. Spain has one of the most impressive runs in European championship history, having not finished lower than fourth in the last eight tournaments. It won in 2009 and 2011, and took the bronze two years ago.
RELATED TOPICS