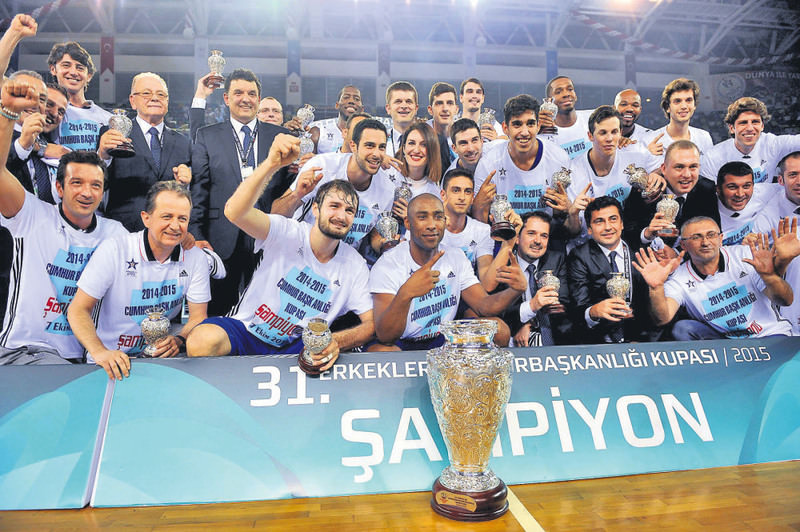 by Hakan Baş
Oct 09, 2015 12:00 am
The 31st President's Basketball Cup final played between Pınar Karşıyaka and Anadolu Efes on Wednesday night witnessed a breathtaking finish with the game going down to the final second. Anadolu Efes lifted the President's Cup after beating reigning league champions Pınar Karşıyaka 76-74 on Wednesday night. Although the İzmir team lost after they were robbed of their brightest stars during the transfer season, they gave star-studded Efes a hard time. However, they were unable to prevent them from winning their first President's Cup after four years without a win in the competition.

Anadolu Efes started the game with a zone defense and did not give their rivals a chance to score in the opening minutes, going on an incredible 15-0 run. Pınar scored their first basket in the sixth minute and Efes finished the first period with a 26-12 lead. The second period started with both sides exchanging baskets. Pınar Karşıyaka erased the difference with baskets from Kenny Gabriel and Justin Carter. The İzmir team managed to decrease the difference to one point with three minutes to go until half time. After the break Efes built up a larger lead and finished the first period up 37-30.

Efes started the second half well and opened up the deficit to double figures. But Pınar did not surrender and decreased the difference to 52-54 before the final quarter of the game. The last quarter could have given a sensitive viewer a heart attack. The score going into the final second was neck and neck, standing at 74-74 in the last eight seconds. Anadolu Efes missed their shot to win the game, but Bryant Dunston tipped the ball in to win on the buzzer and redeem the team. After an official review the refs considered the basket valid. Efes won their 10th President's Cup with the win. The team won the cup last during the 2009-2010 season against Beşiktaş.

Pınar Karşıyaka are looking to defend its Basketball Super League (BSL) title, while Fenerbahçe, Anadolu Efes, Darüşşafaka Doğuş, and other clubs will challenge them for the top spot.