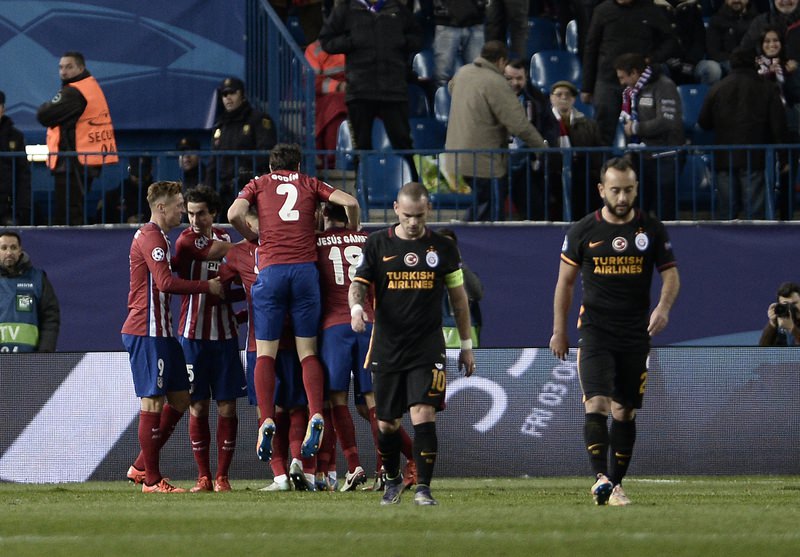 by Daily Sabah with Wires Nov 26, 2015 12:00 am
Antoine Griezmann scored a goal in each half as Atletico Madrid comfortably defeated Galatasaray 2-0 to advance to the knockout stages of the UEFA Champions League on Wednesday.

Griezmann scored in the 13th and 65th minutes at the Vicente Calderon Stadium, both times set up by team captain Gabi. The Frenchman opened the scoring with a header and sealed the victory with a shot from close range.

All four of Griezmann's goals in this season's Champions League have come against Galatasaray.

Replays showed that he appeared to be offside when he scored his second goal on Wednesday.

Atletico Madrid has 10 points from five matches in Group C, while the Turkish team was eliminated with four points.

Benfica also moved to 10 points after a 2-2 draw at FC Astana, which remained last with three points.

Atletico Madrid has the group lead on goal difference, and will fight Benfica for first place when the teams meet in Portugal on Dec. 8. Galatasaray will take on Astana to decide which team gets to play in the Europa League.

It was the third group-stage win for Atletico, who only needed a draw to qualify for the next round. Galatasaray has only one win and needed a victory on Wednesday to remain with any chances of advancing.

Atletico was in control for most of the match and the Turkish side couldn't threaten the Spanish giants much despite the presence of world-renowned strikers Wesley Sneijder and Lukas Podolski.

Atletico striker Fernando Torres failed again in his attempt to score his 100th goal with the Spanish team.
RELATED TOPICS