Fenerbahçe at ease, Real in danger ahead of Euroleague challenge 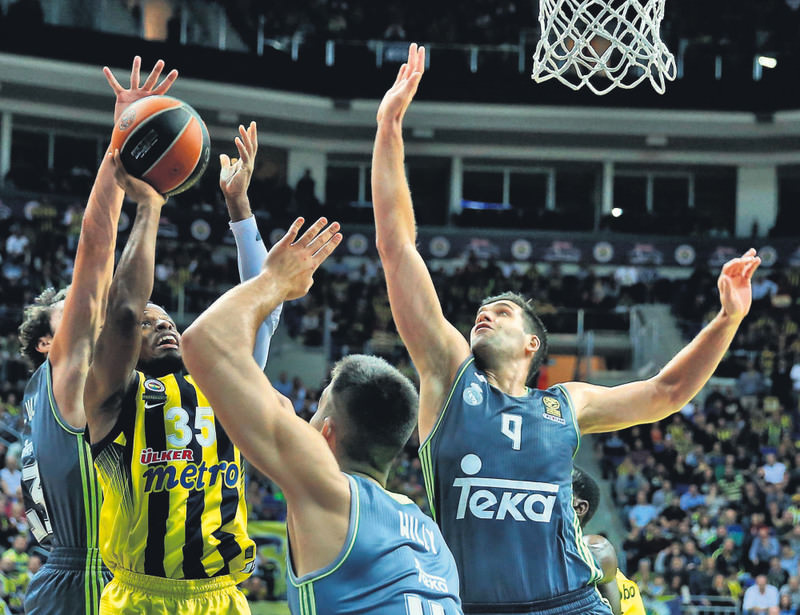 by Daily Sabah Dec 03, 2015 12:00 am
With Fenerbahçe having secured Euroleague Top 16 berth last week, the Turkish outfit can afford to relax as they have taken on hapless title holders Real Madrid. The match between Fenerbahçe and Real Madrid will be played at Barclaycard Center in Madrid. Fenerbahçe top Group A and have only been defeated once. They beat Strasbourg last week and secured a top 16 berth with three matches to go. Fenerbahçe won five matches consecutively in the group and want to continue their winning run.

The title holders Real Madrid however had a poor start to the group matches. The Spanish powerhouses have had two wins in their first seven matches. They have lost their last three matches and are in the danger of being eliminated from the tournament. With Real Madrid anchored in their group, they absolutely have to win against Fenerbahçe or leave themselves with an almost unassailable task. The first match between them was won by Fenerbahçe 77-66. Feenrbahçe's Barış Hersek, Ricky Hickman and Ekpe Udoh will not be able to play against Real Madrid tonight. Meanwhile, Real Madrid announced on their official website that guard Rudy Fernandez will undergo back surgery this week, which supposes his absence for the foreseeable future.

Fernandez was diagnosed with a herniated disk, the statement said, and will be operated on today. Fernandez already missed the last Spanish League game against Dominion Bilbao Basket this weekend. In the last Turkish Airlines Euroleague game against Crvena Zvezda Telekom Belgrade, Fernandez only played 11 minutes despite averaging almost 30 prior to that. This news comes at the worst possible time for the defending champs, as they fight to survive the Top 16 race with a 2-5 record. Fernandez has been averaging 10 points, 3.3 rebounds and 2.3 assists for Los Blancos in seven games.
RELATED TOPICS