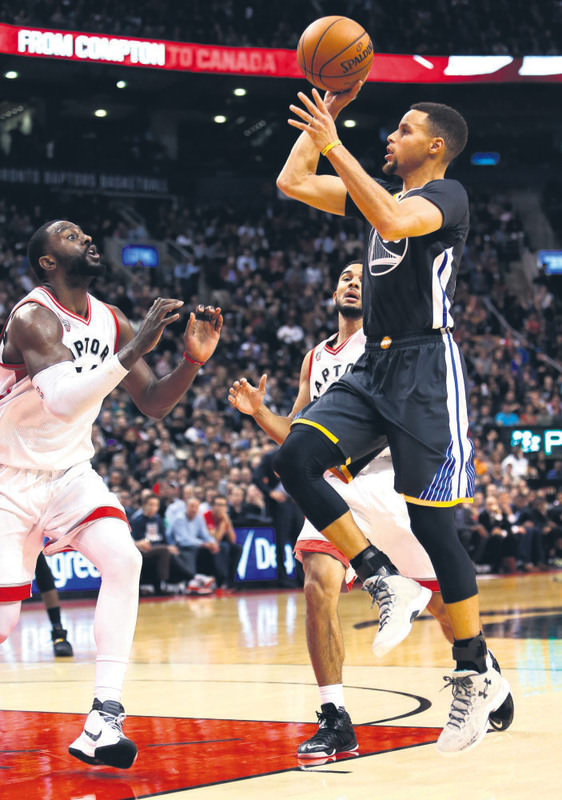 The Golden State Warriors held off the Toronto Raptors on the road for an 112-109 victory, extending their undefeated start to 21 games and their winning streak to 25, dating back to last season

The undefeated Golden State Warriors survived a late scare before stretching their winning streak to 25 consecutive games with a 112-109 victory against the Toronto Raptors on Saturday.

Reigning NBA MVP Stephen Curry scored 15 of his game-high 44 points in the fourth quarter for the Warriors, who are off to a 21-0 start to the season, including 11-0 on the road.

"We expect teams to fight and come back when we are on the road and that is what they did," said Curry. "We made some shots, got a few stops along the way and pulled it out."

The Warriors have won 25 straight regular season games dating back to last season. Their streak started with a 116-105 win over Portland in April.

The Raptors trailed by as many as 13 points in the first quarter and by 10 points at half time. Toronto took the lead at 85-84 in the final quarter.

Toronto led 98-95 when their forward Luis Scola made two free throws with just over four minutes to play in the fourth, but Curry tied it with a 3-pointer.

Curry made two free throws with 18 seconds remaining for a 108-105 Warriors lead. Kyle Lowry cut the margin to one point with a basket before Warriors guard Klay Thompson made a pair of free throws with seven seconds to play.

The lead was down to one when Scola made two free throws with 6.2 seconds left. Curry made both his free throws and Toronto's Cory Joseph turned over the ball with three seconds to play as it rolled out of bounds into the hands of rapper and Raptor fan Drake, who was sitting courtside.

Guard Lowry led the Raptors with 41 points and seven assists in front of a crowd of 20,100 at the Air Canada Centre.

"He made some tough shots. He was the catalyst for them in the second half. We were going back and forth. Thankfully I made one more play," Curry said of Lowry.

Golden State will play the fourth game of a seven-game road trip Sunday at Brooklyn against the Nets.

"We will rely on our depth as we go into Brooklyn," Curry said.

LeBron James took the night off and the Cleveland Cavaliers paid a heavy price, losing 99-84 to James' former team the Miami Heat at the American Airlines Arena.

Without James, the Heat were too much for Cleveland, who have lost their last 10 games in Miami.

Dwyane Wade scored a game-high 19 points for the Heat, who improved to 12-6 after winning their last two games.