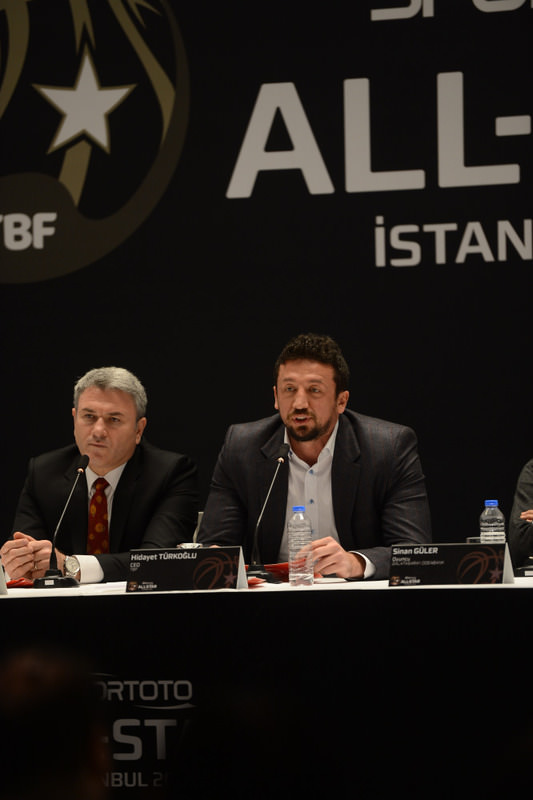 by daily sabah Jan 21, 2016 12:00 am
Turkish Basketball Federation CEO Hidayet Türkoğlu and Spor Toto Basketball League (BSL) Director Samer Şenbayrak announced the selections for the Spor Toto All-Star 2016, set for Jan. 24 at the Ülker Sports Arena in Istanbul. "With the support of our sponsors and the participation of such talented athletes, this promises to be the best Spor Toto All-Star yet," Türkoğlu said.

"I invite all fans to be a part of the excitement at the Ülker Sports Arena, it's going to be a great day of basketball."

The 16th Spor Toto All-Star game will feature some of the biggest stars in international basketball as Team Asia faces Team Europe. The day kicks off at 1:30 p.m. with the Leaseplan Skills Competition, the ING Bank 3-Point Contest, and the Sony Xperia Slam Dunk Competition. The main event tips off at 4:30 p.m. The action will be broadcast live. Each team's starting five was selected via fan voting on a new platform sponsored by Sony Xperia.

"The number of fans who voted this year was unprecedented, reflecting the tremendous passion our fans have for basketball and the Spor Toto Basketball League," Şenbayrak said. "Last year we broke the attendance record for the All-Star game and experienced an unforgettable day. With new innovations this year we will set an even higher standard."

In addition to the basketball excitement, Turkish singer Ece Seçkin will perform alongside producer and DJ Ozan Doğulu. At the press conference's conclusion Türkoğlu invited fans across Turkey to submit a video of their "All-Star moves" via Twitter. The best videos tweeted to the @basketsuperligi Twitter account with the hashtag #allstarhareketim (My All-Star Move) will be eligible for special prizes, including the opportunity to participate in the opening tip and watch the game courtside with the All-Stars.
RELATED TOPICS