Turkish teams climb up to Last 16 stage in Eurocup 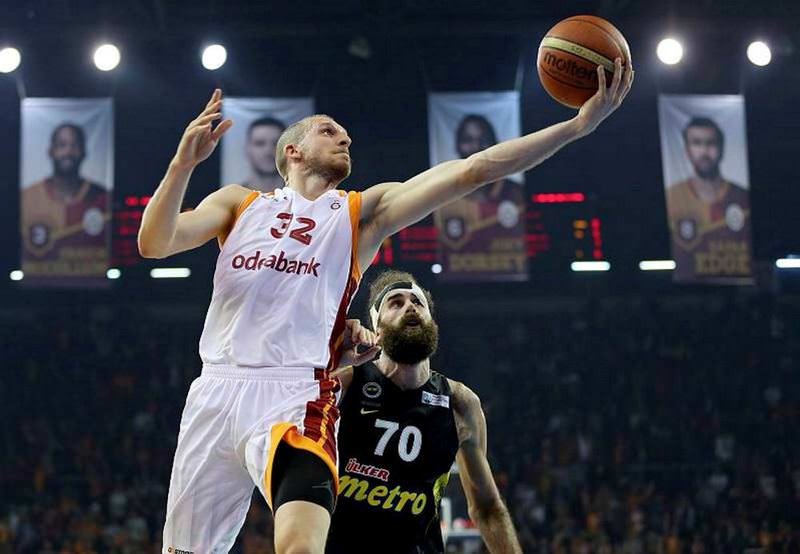 Three Turkish teams secured places in the Last 32 stage of the prestigious Eurocup by defeating Italian and Spanish rivals on Tuesday night. Pınar Karşıyaka and Galatasaray Odeabank will square off in the final rounds of the competition

Galatasaray Odeabank, Pınar Karşıyaka and Banvit won their way through to the Last 16 stage of the ULEB Eurocup on Tuesday night while Trabzonspor Medical Park bade farewell to the cup despite defeating Italy's Dolomiti Energia.

Pınar Karşıyaka and Galatasaray Odeabank will square off against each other after both completed their matches in their groups in the first two spots. The two teams will face off on Feb. 23-24 and March 1-2 to reach the quarter-finals.

Banvit, who wrapped up their Group G stint in the Eurocup in second place, will face Italy's Emporio Armani Milano.

Pınar Karşıyaka beat Italy's Grissin Bon 109-66 in last night's home game. Karşıyaka got off to a fast start with a 13-3 lead in the first five minutes and wrapped up the first period 24-18. Kenny Gabriel and Josh Carter shone for the Turkish team while their Italian rivals had a hard time launching their offense and were weak in defense.

Galatasaray Odeabank dominated the court against Italy's Dinamo Banco di Sardegna Sassari and clinched a 87-69 win. After a 11-11 draw by the eighth minute, Galatasaray went off in the following periods though it was troubled by strong defending by the Italian team. Sinan Güler was the top scorer with 18 points.

Banvit defeated Spain's Dominion Bilbao Basket 73-65 in last night's game to secure its place in the last 16 stage. Banvit's Courtney Fortson dominated the game with 24 points, along with Dominique Johnson who scored 18 points.

Galatasaray Odeabank and Pınar Karşıyaka can now look forward to grabbing the chance to square off against Bayern Munich or Alba Berlin, one of whom they would face after winning the quarter-final qualifiers.

Speaking after Tuesday night's game, Galatasaray Odeabank coach Ergin Ataman said it was "unlucky" for two Turkish teams to face off in the Eurocup Last 16. "Both teams were good enough to play in the finals," he said. Ataman acknowledged Galatasaray's series of "mistakes" in the opening periods and criticized the team's U.S. center Joey Dorsey for not exerting enough effort. "He is certainly preoccupied with transfer offers but our stance is clear. He will not go anywhere and he will be grounded if he fails to perform better," he said.

Pınar Karşıyaka coach Ufuk Sarıca said Galatasaray Odeabank are "serious rivasl" but they are confident of beating them anyway.

The two teams will play without fans after they agreed on not allowing them in due to violence in past games.

Pınar Karşıyaka managed to secure a spot in the Eurocup quarter-finals last season but lost to Gran Canaria and were eliminated from the competition. The team, after a good start this season, suffered from a lackluster performance in the Euroleague and domestic league. After transferring Bracey Wright and Lazeric Jones, they boosted their performance and enjoyed a streak of four wins in the Turkish league.
RELATED TOPICS