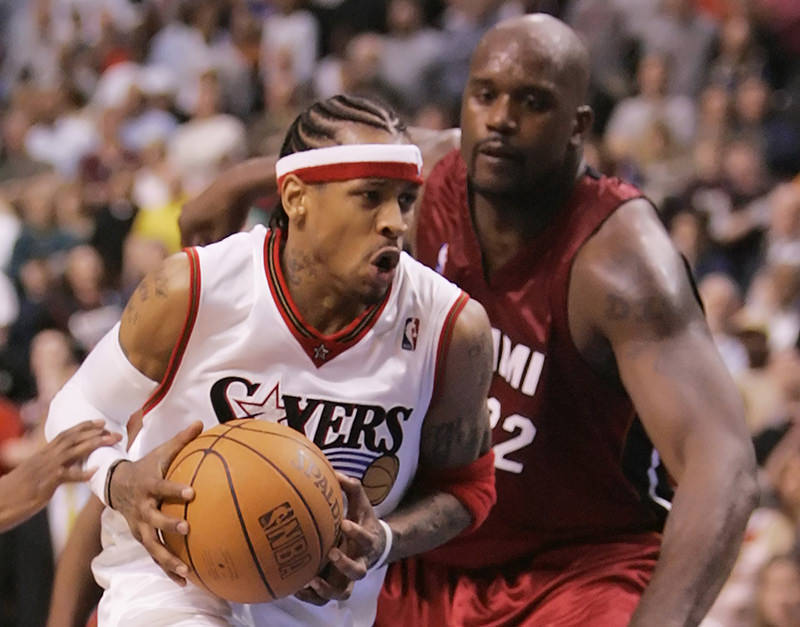 Dominant big man Shaquille O'Neal and pint-sized Allen Iverson were nearly unstoppable around the basket in their glory days. On Monday, there was no denying the two former stars their rightful places in the Naismith Basketball Hall of Fame Class of 2016.

O'Neal was a 15-time All-Star who won four NBA Championships, including three with the LA Lakers during his 19 NBA seasons.

The bigger than life 7-footer is one of four players to win three Finals MVP awards and is in the league's top 10 career scorers at 23.7 points per game and 10.9 rebounds.

"It's a great moment and I'm super excited," said O'Neal, a member of the NBA 50th Anniversary All-Time Team "All my dreams have come true."

Iverson captured four scoring titles and was the league's MVP in 2001, carrying the Philadelphia 76ers to an NBA Finals runner-up spot to O'Neal's Lakers.

The 11-time All-Star is the only player 6-feet or shorter to average at least 20 points per game for his career, finishing at 26.7 in his 14 seasons.

Iverson points to Michael Jordan as his inspiration for success.

"I honour and respect the guys before me because they gave me a vision. Mike gave a vision. He made me want to be a basketball player."

Yao became the third Chinese player in league history after being drafted by the Rockets in 2002 and immediately increased the global popularity of the game.

The dominant 7-foot-6 centre was an eight-time NBA All-Star but never reached his full potential because of a variety of injuries before retiring in 2010.

"I know who is on the list and feel very honoured to be a part of this list," Yao said.

O'Neal was delighted to have Yao in the same class.

"The first time I met him he blocked my shot," O'Neal said. "Congrats, you definitely deserve it. You're a great friend and a great ambassador to the game."

Swoopes was a pioneer on the women's side. After turning in a spectacular 47-point performance in leading Texas Tech to the 1993 NCAA championship, she became the first player signed by the WNBA, winning three MVP awards and four championships.

"I'm so excited, I feel like a kid in a candy store on Christmas," said the three-time Olympic gold medalist. "I'm thrilled to be part of this class."

Since becoming head coach at Michigan State in 1995, Izzo has chalked up 524 victories. He guided the school to seven Final Fours. In 2000, and took the Spartans to the NCAA title over Florida.

Reinsdorf took over as owner and chairman of the Bulls in 1985, and has molded them into a solid franchise, winning six NBA Championships in the 1990s.

Garretson was a top NBA referee for 27 years and served 17 as the league's chief of officiating. He worked 1,798 regular-season games, 269 playoff games, 41 Finals games and five All-Star Games.

McClendon was the first African-American coach in a professional league, guiding the American Basketball League's Cleveland Pipers. Prior to that, he was at the helm of three NAIA championships.

Beatty played 12 seasons, eight in the NBA after spending four in the ABA, averaging 17 points and 10.9 per game.

Posey was the best African-American basketball player of his time, playing from the early 1900s through the mid-1920s. After retiring from basketball, he became a standout in baseball and was inducted into the Baseball Hall of Fame in 2006.

The 10 newest members of the Class of 2016 will be enshrined in a ceremony on September 9 in Springfield, Massachusetts.

"The Class of 2016 is big in stature, personality and impact," said Jerry Colangelo, chairman of the board at Naismith Memorial Basketball Hall of Fame. "You you see the diversity represented here.

It's just a place to honour the best. You walk into the hall it's a shrine."