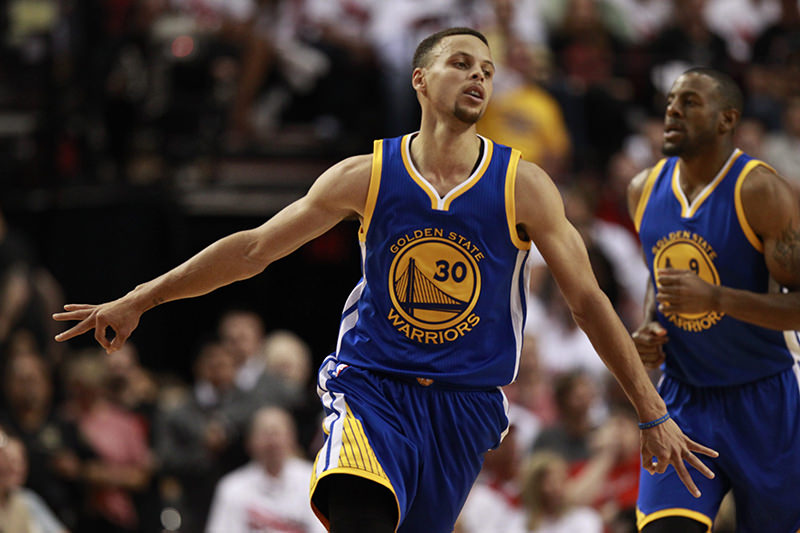 Stephen Curry is the first unanimous NBA MVP, earning the award for the second straight season Tuesday after leading the defending champion Warriors to a record-setting season.

The Golden State superstar is the 11th player in league history to be voted MVP in consecutive seasons and the first guard to do so since Steve Nash in 2004-05 and 2005-06. Curry received 1,310 points from the 130 media voters from the U.S. and Canada.

He was followed in the vote by Kawhi Leonard of San Antonio, LeBron James of Cleveland and Oklahoma City teammates Russell Westbrook and Kevin Durant. Curry's teammate Draymond Green was seventh.

Curry is the first two-time winner in franchise history, and Wilt Chamberlain (1959-60) is the only other Warriors winner. After guiding Golden State to its first championship in 40 years, Curry & Co. took that success even further to finish with 73 regular-season wins to top mark set by the 1995-96 Chicago Bulls team that went 72-10.

In a stunning overtime performance Monday night, Curry showed exactly how he can take over a game in a matter of seconds. He returned from a sprained right knee to score 40 points — and 17 in overtime — in a 132-125 win at Portland to put his team up 3-1 in the Western Conference semifinals.

"I figured that he'd find his stroke and make a few shots, but I mean that was, that was crazy," said Steve Kerr, who was voted NBA Coach of the Year last month.

Curry, now one of the most recognizable athletes worldwide, will be presented with his MVP trophy Tuesday at Oracle Arena before trying to close out the series against the Trail Blazers at home Wednesday night.

With his dazzling ballhandling and jaw-dropping long-range touch from way, way back, Curry has forced defenses to extend. He made a record 402 3-pointers after no player had previously even hit 300 in a season. He averaged an NBA-best 30.1 points per game to go with 6.7 assists and 5.4 rebounds. He also led the NBA with 2.1 steals a game while shooting 50.4 percent from the field, 45.4 percent from 3-point range and 90.8 percent from the foul line.

From the start of the season, Curry vowed to take his game to another level — and did he ever. Now, all that matters to him is staying healthy and leading the Warriors to another title.

"The reason Steph is as good as he is because he can score from anywhere," Kerr said. "If you take away the 3 he can penetrate and hit the floaters or get to the rim."

Curry understands the scrutiny that comes with being an MVP and playing on a championship team.

"They're going to have more of a spotlight, and people are going to ask questions about whoever it is," he said. "When there are legends and people that I looked up to as a player — as a young kid, as a basketball player — Hall of Famers and guys that talk about our team, it means that obviously we're doing something good so we keep doing it. I take it with a grain of salt."