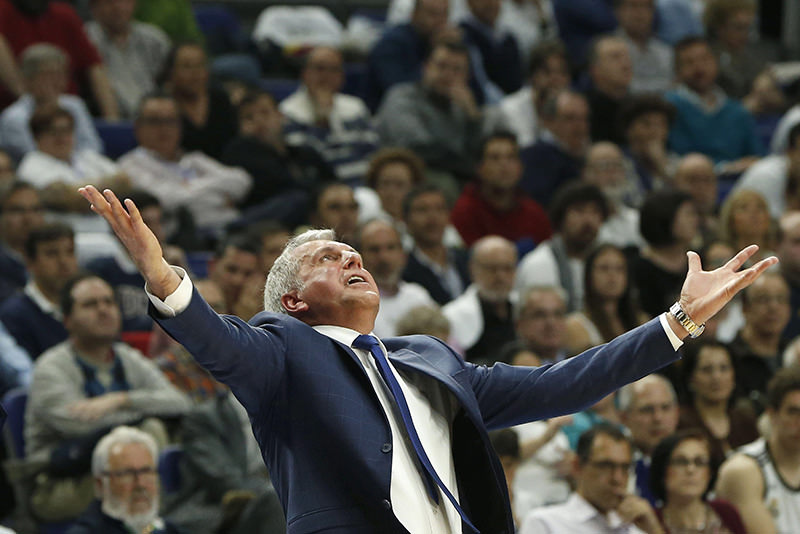 by Daily Sabah with Reuters May 12, 2016 12:00 am
The Euroleague's most successful coach Zeljko Obradovic will be aiming to add a ninth trophy to his collection when he takes Turkish giants Fenerbahçe to the Final Four of basketball's premier club competition next weekend

Fenerbahçe Ülker's coach Zeljko Obradovic won five of his record eight titles with Greek outfit Panathinaikos and one each with Real Madrid, Joventud Badalona and Partizan Belgrade. And now, his current team Fenerbahçe Ülker are favourites to win the Euroleague, which no other Turkish club has done. After several years of heavy investment, the club boasts an array of European household names and several former NBA campaigners. They will meet Spain's Laboral Kutxa Vitoria for a berth in the final after six-time winners CSKA Moscow take on fellow Russians Lokomotiv Kuban Krasnodar in the opening semi-final in Berlin's Mercedes-Benz Arena on Friday. Sunday's final will be preceded by the third-place playoff.Speaking to www.euroleague.net, Obradovic was confident about his team, which has romped through to this year's showpiece event after being blown away in the semi-finals last year by Real Madrid, who went on to become 2015 champions. The overhauled outfit includes some key performers who have not played in the Final Four before, such as playmaker Bobby Dixon and Italy forward Luigi Datome.

"Those players who were in the Final Four will help them understand the occasion, just as me and my staff will," Obradovic said.

"I can see that my team is very motivated and determined to go all the way. It won't be easy but if we show the same spirit we had in the quarter final win against Real Madrid, I will be happy no matter what the outcome."

Fenerbahçe Ülker got sweet revenge for their 2015 defeat by brushing Real Madrid aside 3-0 in their best-of-five series to reach this year's Final Four. Standing in their way will be Laboral Kutxa, one of the season's two surprise packages, who swept past Panathinaikos 3-0 in the quarter-finals thanks to lethal three-point shooting. Their Croatian coach Velimir Perasovic acknowledged Laboral faced a daunting task against Fenerbahçe Ülker.

"They have a great balance, a lot of quality individuals and players who are hungry for success. But no team is unbeatable."

CSKA, who won their last title in 2008, will hope to put recent near-misses behind them as they lock horns with Final Four debutants Lokomotiv, who stunned two-time winners Barcelona on the road to Berlin. Having lost two finals and four semis since capturing their last crown, CSKA will bank on the experience of playing familiar domestic opposition.

"We know each other and that's a factor," said CSKA's Greek coach Dimitris Itoudis. "They have a versatile style and it is going to be an interesting game."

His compatriot Georgios Bartzokas, the Lokomotiv coach, stressed that being the underdogs would allow his team to play devoid of any pressure. "I think we have to overcome our lack of experience with our enthusiasm," said Bartzokas. "I feel proud of this team and we have to enjoy our Final Four participation a bit."
RELATED TOPICS