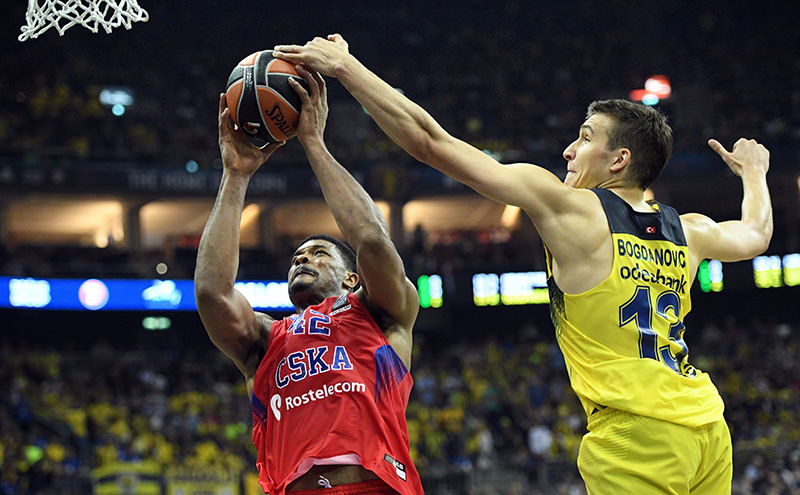 Bogdan Bogdanovic (R) of Fenerbahce Istanbul in action against Kyle Hines of CSKA Moscow in action during the Euroleague Final Four final basketball match. (EPA Photo)
by Daily Sabah with AA May 16, 2016 12:00 am

Fenerbahçe became 2015-16 Turkish Airlines Euroleague runner-up after losing to CSKA Moscow 101-96 in overtime in the final at the Mercedes-Benz Arena in Berlin late on Sunday.

The clash between the two ended 83-83 so the game went into overtime.

CSKA Moscow guard Nando De Colo was the top scorer of the match with 22 points. His teammate, Milos Teodosic, tallied 19 points for CSKA.

The Turkish team was a favourite to win the Euroleague, which no other Turkish club has done. After several years of heavy investment, the club boasted an array of European household names and several former NBA campaigners. Fenerbahçe also got sweet revenge for their 2015 defeat by brushing Real Madrid aside 3-0 in their best-of-five series to reach this year's Final Four.

Last year, Fenerbahçe lost against the Moscow club 86-80 in the third-place game of the Euroleague. Six-time Euroleague winner CSKA Moscow has reached the finals 12 times before. Fenerbahçe had sought to become the first Turkish club to lift the trophy; while its coach, Zeljko Obradovic, already has a record eight titles with four different clubs.