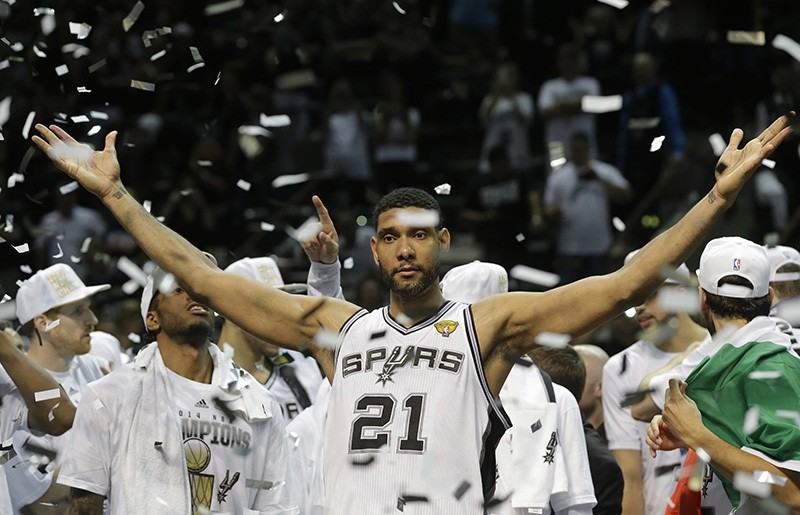 The 40-year-old Duncan, who was originally selected by the Spurs as the first overall pick in the 1997 NBA draft, spent his entire career with the team. They reached the playoffs in every one of his 19 seasons, the team said in a statement.

Duncan, together with Tony Parker and Manu Ginobili, formed one of the most successful trios in NBA history. They hold the league record for regular season wins (575) and postseason wins (126), according to the team.

Duncan and Spurs coach Gregg Popovich also formed a dynamic duo, accounting for the most wins ever by a player-coach duo at 1,001.

Duncan, a three-time NBA Finals MVP and a two-time regular season MVP, is widely regarded as one of the best power forwards ever to play the game.

He averaged 19 points and 10.8 rebounds per game during his career. Last season's campaign was disrupted by a knee injury and he played in only 61 games.

San Antonio was eliminated in the playoff this past season by the Oklahoma City Thunder.

In a league where players often change teams, Duncan was an anomaly -- he remained with the Spurs for 19 seasons, a mark tied by Laker great Kobe Bryant, who retired this season, and retired Utah Jazz guard John Stockton.

At the end of June, Duncan had exercised a $6.4 million player option for next season, but talk of retirement loomed large.

Spanish star Pau Gasol, who during his career has played power forward and center, has reportedly agreed to join San Antonio on a two-year deal worth $30 million, after spending the last two seasons with the Chicago Bulls -- and it now looks like he will help fill the void left by Duncan.

Ginobili, 38, has said he plans to take his time in deciding about playing a 15th season for the Spurs for $2.9 million next season.

"A player who will never be replaced. Thanks for the memories!" said the alumni of Duncan's alma mater, Wake Forest University.