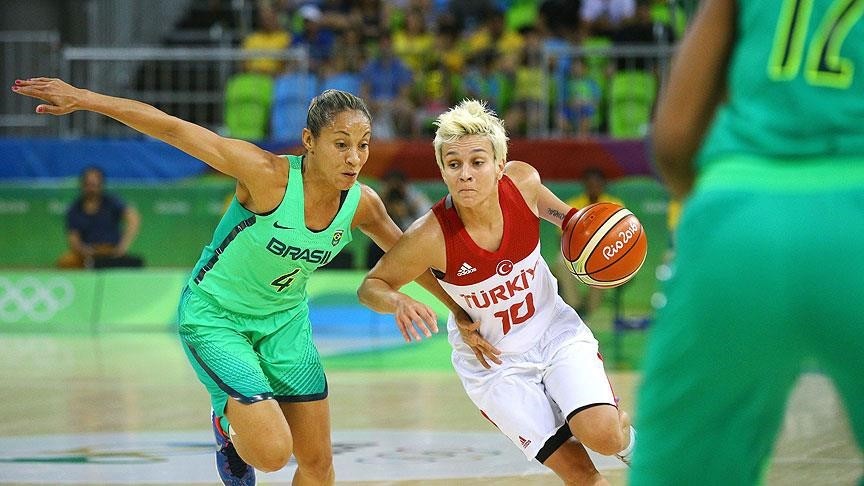 Although Brazil have the biggest and loudest support trying to will the hosts to a win, Turkey denied the South Americans a lone win in the women's basketball

Turkey denied hosts Brazil a lone win in the women's basketball Saturday, rallying from 18 points down in the third quarter and beating the Brazilians 79-76 in double overtime. The boisterous home crowd was working early, as Brazil (0-5) grabbed an early lead and appeared to be cruising before Turkey went on a 24-5 run to set up a thrilling finish that kept fans on their feet. Lara Sanders led Turkey (3-2) with 23 points, but Işıl Alben engineered the comeback with 18 points, nine rebounds and eight steals. Brazil had the chance to send the game to triple-overtime. Iziane Castro's 3-pointer bounced off the rim at the buzzer, leaving coach Antonio Carlos Barbosa sitting stunned on the bench. Castro finished with 22 points in what was a long day for Brazilian basketball fans. The men's team lost in double-overtime, 111-107 against Argentina, shortly before the women's game ended.

Here are the other highlights in Rio Olympics:

A classic Michael Phelps performance ended the swimming legend's career with 23 Olympic gold medals before handing over the Rio Games center stage to Usain Bolt. Mo Farah stole the show in the athletics in the 10,000m on Saturday. The United States says it reached 1,000 gold medals overall, but the night belonged to an emotional Phelps. The 31-year-old had to come from behind on the butterfly leg of the 4x100m medley but set up the victory in 3min 27.95sec which included a world record in the backstroke leg by America's Ryan Murphy.

It was a fittingly triumphant swansong for Phelps, 31, the most decorated Olympian in history who added five golds and a silver in Rio. He finished his career with 28 medals overall.

"This is how I wanted to finish my career. I've lived a dream come true. Being able to cap it off with these Games is just the perfect way to finish," he said.

The United States won its 1,000th Olympic gold medal on Saturday when the American women's 4x100 meter medley relay team clinched victory at the Rio Games. The honor of reaching the milestone was shared by Kathleen Baker, Lilly King, Dana Vollmer and Simone Manuel, who got to the wall first ahead of Australia.

"One thousand gold medals is a remarkable achievement made possible by the culture of sport that is the fabric and foundation of Team USA," United States Olympic Committee (USOC) head Scott Blackmun said. Of the 1,000 gold medals, more than half have come from track and field (323) and swimming (246), USOC added.

To a soundtrack of "Si se puede!" from the stands, Monica Puig won Puerto Rico's first gold medal in any sport in Olympic history, upsetting Angelique Kerber of Germany 6-4, 4-6, 6-1 in the women's tennis singles final Saturday at the Rio de Janeiro Games. Puig is also the first woman representing Puerto Rico to earn a medal of any color at an Olympics, and when she finished a tense closing game - saving six break points and converting her fourth match point - she dropped her racket and went over to collect a flag she paraded across the court. Gigi Fernandez, who is Puerto Rican, won two Olympic women's doubles gold medals in tennis, but did so while representing the United States.

Russia dismantled Ukraine to win their fourth fencing gold at the Rio Olympics as the Americans took bronze over traditional powerhouse Italy for the second straight day. Russia lost just one of nine bouts in the women's team saber final, trouncing Ukraine 45-30 to rack up seven fencing medals at the Games - their best performance in two decades.

Iran won their second gold medal in two days on Sunday when Sohrab Moradi finished well clear of his rivals in the men's 94kg weightlifting. They could achieve a record-breaking three weightlifting golds at a single Games if favorite Behdad Salimikordasiabi retains his super-heavyweight title on Tuesday. When Kianoush Rostami broke a world record in winning the 85kg on Friday he predicted more glory to come for Iran.

Bronze for Muslim US fencer Muhammad

Fencer Ibtihaj Muhammad came to the Rio Games determined to show the world that Muslim-American women could compete at the highest level in sports. And the 30-year-old from New Jersey, the first U.S. Olympian to wear a hijab - the headscarf worn by Muslim women - during competition, came away with a bronze medal on Saturday in the women's team sabre event.

American veteran Venus Williams became only the second tennis player in history to win five Olympic medals after reaching the mixed doubles final. The 36-year-old teamed up with Rajeev Ram to beat India's Sania Mirza and Rohan Bopanna 2-6, 6-2, 10-3 in the semi-final.
RELATED TOPICS