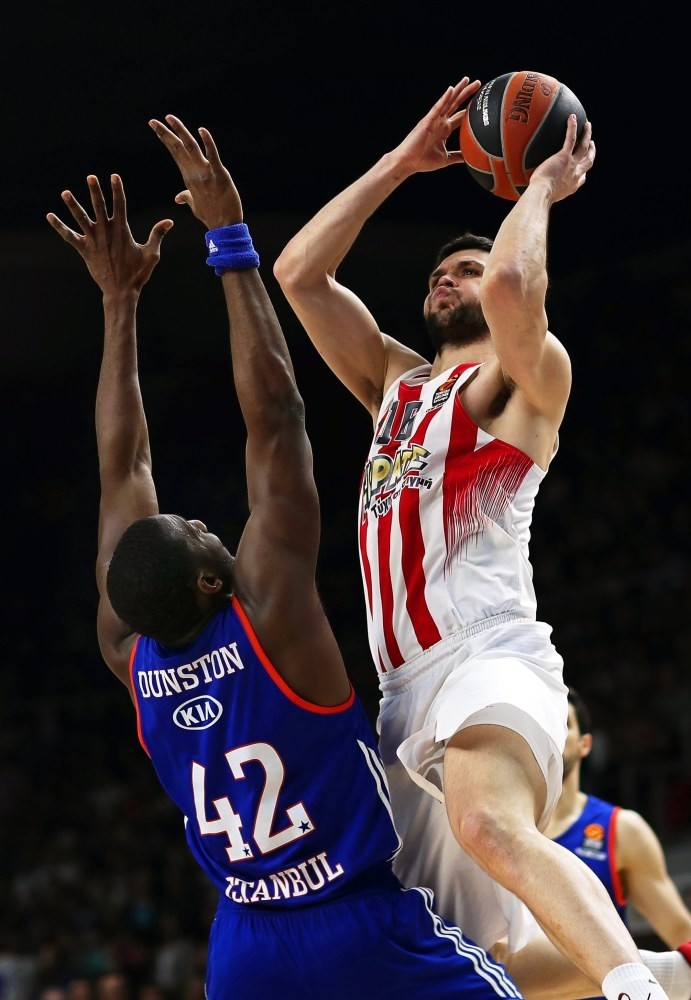 Olympiacosu2019 Kostas Papanikolaou (R) in action against Anadolu Efesu2019 Bryant Dunston (L) during the Euroleague Playoff round 3 basketball match in Istanbul.
by Daily Sabah May 04, 2017 12:00 am

The Turkish Airlines Euroleague semifinals on May 19 will pit Olympiacos against defending champions CSKA Moscow, while Real Madrid will take on last season's runners-up Fenerbahçe

The semifinals to be played at the Sinan Erdem Dome on Friday, May 19 will now pit the Reds against defending champs CSKA Moscow, in a rematch of the memorable 2012 championship game.

This will mark the first time ever that all four teams will play the same semifinals matchups they did the previous year.

Meanwhile, Fenerbahçe will become the first Turkish side to play in the Final Four on their home turf after qualifying first to the semis by sweeping Panathinaikos Superfoods.

With a 79-61 Game 3 victory against Panathinaikos, Fenerbahçe became the first team in the nine-year history of the best-of-five playoffs format to sweep a series they entered without home-court advantage.

The Yellow Canaries had already been the only team to win consecutive best-of-five series by sweeps, and this one made it three in a row.

Turkish basketball has made a comeback in Europe in recent years. Anadolu Efes had been the last Turkish team to reach the Final Four, but after a 15-year absence, Fenerbahçe has managed to reach the semifinals three years in a row.

Now, they will have extra time to prepare to try to become the first-ever Turkish champions of Europe.

Meanwhile, the defending champs CSKA reached their 14th Final Four in 15 years by going on the road to stop host Baskonia Vitoria Gasteiz 90-88.

CSKA had the longest-ever streak of Final Four appearances with eight between 2003 and 2010. Their current streak, which began in 2012, is now up to six years in a row. No other team has ever been to more than four Final Fours consecutively.

CSKA will return to the scene of perhaps their most painful Final Four defeat. In the 2012 championship game against Olympiacos in Istanbul, CSKA were leading by 19 points with 12 minutes left only to lose at the buzzer.

However things are looking up for CSKA this time around, with the reigning champs looking for their third repeat title after having missed the chance by just two points in both 2007 and 2009.

As for their opponents, Olympiacos qualified for their sixth Final Four in the past nine seasons, with an 87-78 win in Game 5 win over Anadolu Efes.

Coach Ioannis Sfairopoulos's squad faced elimination twice in the series against Efes, having trailed 1-2 in the series, but survived with a road win in Game 4 before clinching the series in the decider on their home floor.

The Reds are going back to the Sinan Erdem Dome, where they famously pulled off the 19-point rally against CSKA on a Georgios Printezis floater to lift the second of their three Euroleague titles in 2012.

Meanwhile, Real Madrid, the most successful team in Euroleague history with nine continental crowns, will be playing their fifth Final Four in the last seven years after taking out Darüşşafaka Doğus.

After dropping Game 2 at home, Madrid bounced back in style against the crafty Turkish side and won two on the road to take the series 3-1 and give themselves another shot at the title.

Real Madrid returned to the Final Four in 2011 for the first time since 1995. Since then, with coach Pablo Laso at the helm, the Spanish team have been regulars on the biggest stage of the season.
Last Update: May 04, 2017 1:54 am
RELATED TOPICS