THY Euroleague Final Four kicks off in Istanbul 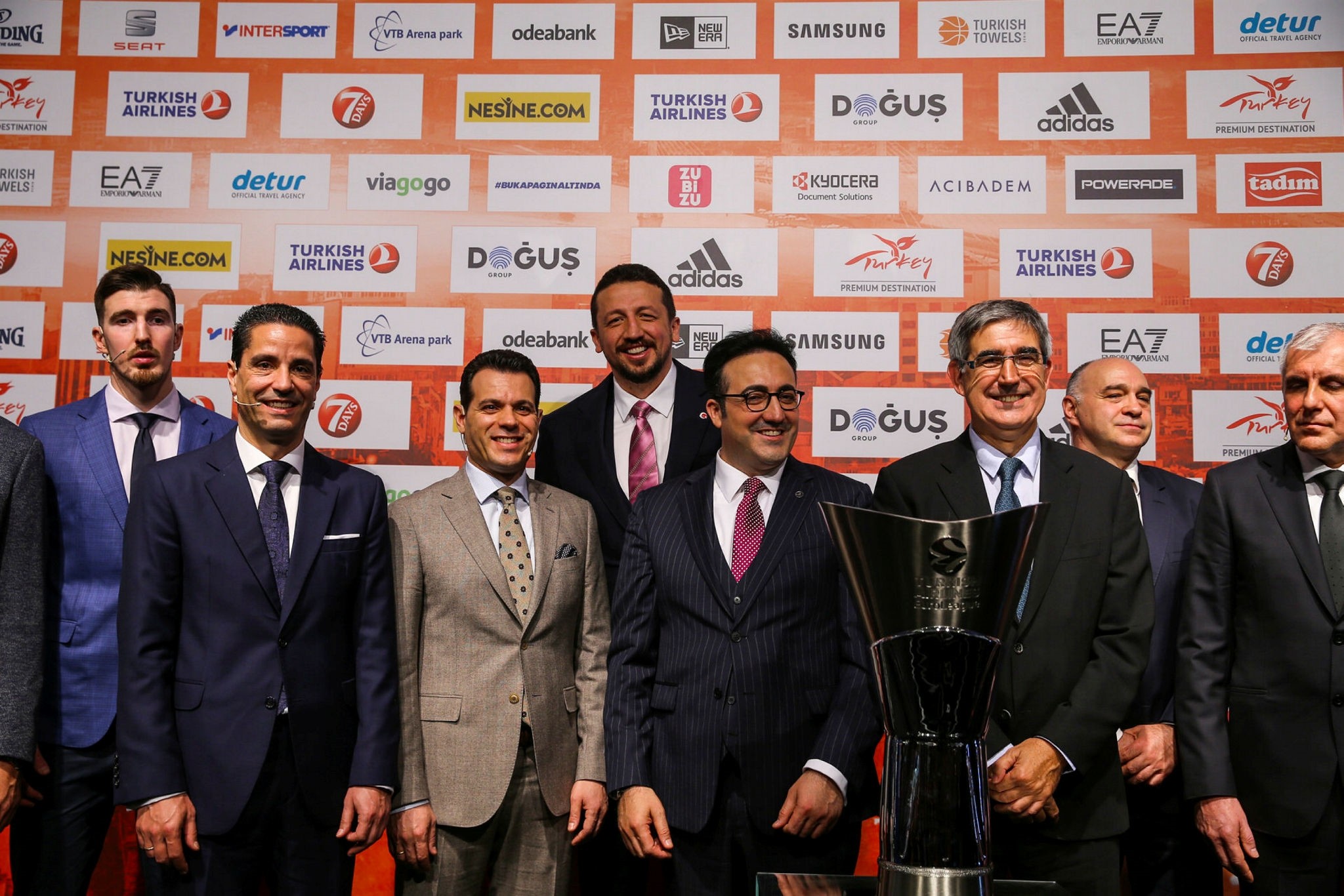 Turkish Basketball Federation President Hidayet Tu00fcrkou011flu (L), THY Chairman of the Board u0130lker Aycu0131 (C) at a press conference ahead of the Final Four.
by Compiled from Wire Services May 19, 2017 12:00 am

Three days of excitement await basketball fans in Istanbul as Turkish Airlines (THY) Euroleague's Final Four contest kicks off in the city today. Istanbul-based Fenerbahçe counts on home advantage as it takes on Real Madrid of Spain and Russia's CSKA Moscow will take on Olympiakos of Greece.

The cup was a near-miss for Fenerbahçe when CSKA Moscow secured a narrow win last year, but the Istanbul club aims for its first cup in the tournament it managed to reach the Final Four for the third time in a row.

The team wrapped up Euroleague season in the fifth place with 18 wins and this is its 11th season in this most prestigious clubs' tournament for European basketball since 1958.

Yellow Canaries count on Bogdan Bogdanovic and Ekpe Udoh who made it to the list of the top five players in the Euroleague. Bogdanovic boasts 14.5 points average while Udoh has a 12 points average for the season. On assists, Fenerbahçe's most prolific player is Greek guard Kostas Sloukas with 4.6 assists average.

Fenerbahçe took on Real Madrid in the past three seasons for eight times and secured five victories. In two games this season, both teams secured one win.

Real Madrid, on the other hand, boasts having most titles in the tournament's history, from its first trophy in 1964 to latest win in 2015, taking home nine trophies in total.

Players, coaches, Euroleague and THY executives held a joint press conference in Istanbul yesterday about the competition. Euroleague CEO Jordi Bertomeu said Istanbul was a magical city blending cultures and had "passion for basketball." "This weekend is magical because it culminates a season in which basketball has been once more a sports pioneer, breaking barriers and creating, for the first time ever in professional sports, a true European league, our EuroLeague. And here, in Istanbul, the first champion of that new era in European basketball, will be crowned. In all honesty, this weekend is not merely the finishing touch of this first season in the new EuroLeague. It also culminates a five-year trip that started back in 2011 with the vision of the clubs to make this European league a reality. Along the way, the clubs have shown the determination and the commitment to work together on a common project to bring pro sports to a new level," he said, referring to renewed, round-robin format of Euroleague last year.

THY Board Chairman İlker Aycı said, "It is the third time Istanbul is hosting this distinct event after 1992 and 2012. Following last year's finals in Berlin, we were determined and enthusiastic to bring the Final Four to Istanbul once again. Despite intense competition, our hard work paid off and once again it is our pleasure to welcome you here." With firm belief in the Turkish Airlines EuroLeague's growing global reach, we expanded our title sponsorship until 2020. Concurrent with our trust, European basketball continues to grow and expand its horizons. European basketball continues to display a rising performance, with an arena performance of 8,200 fans on average signaling a 15 percent increase after the adoption of a total round-robin regular season," Aycı added.