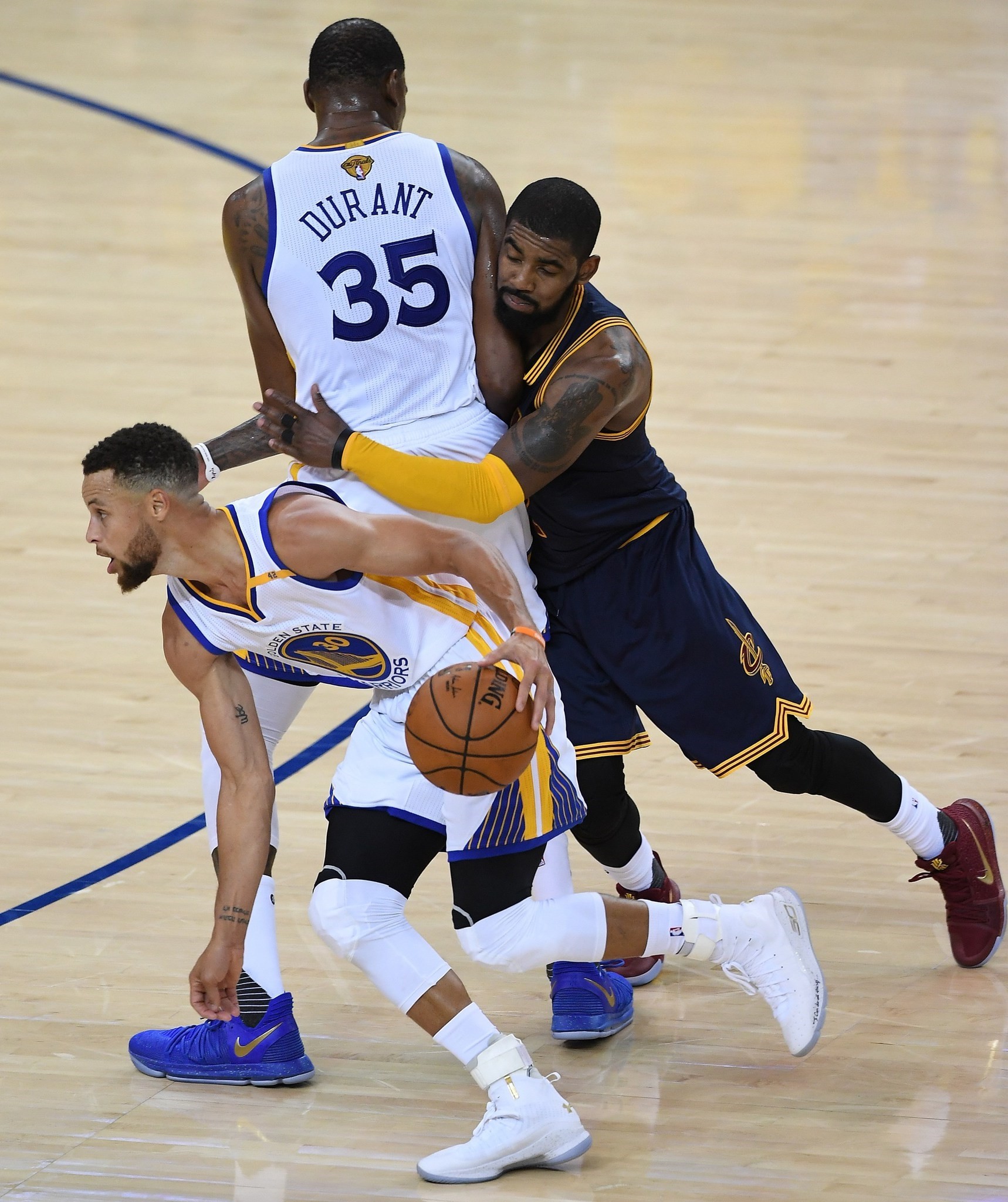 Kevin Durant #35 of the Golden State Warriors sets a pick on Kyrie Irving #2 of the Cleveland Cavaliers as teammate Stephen Curry #30 drives to the basket during the 2017 NBA Finals.
by French Press Agency - AFP Jun 06, 2017 12:00 am

"We're young. We're hungry. We're playing great basketball," Curry said. "We've got a great opportunity in front of us and we've got to seize it."

The Warriors, who welcomed back coach Steve Kerr after he missed 11 games with health issues following 2015 back surgery, grabbed a 2-0 edge in the best-of-seven series, which shifts to Cleveland for games three and four on Wednesday and Friday.

"To see him back on the bench was huge," Curry said. "For him the whole priority was his health and I think he's in a good place right now."

Golden State had won a record 73 regular-season games last year and led 2-0 only for Cleveland to make the greatest comeback in NBA Finals history and swipe the title. So the perfect playoff mark wasn't overly lauded.

"It has been a great run, but none of that matters unless we can finish the job," Kerr said. "We know, trust me, we know. It was 2-0 last year and we lost."

LeBron James led the Cavaliers with 29 points, 11 rebounds and 14 assists to match a record with his eighth career NBA Finals triple double. Only former Los Angeles Lakers legend Magic Johnson had eight prior finals triple doubles. No one else has more than two.

"Right now, it means nothing," James said minutes after the loss. "But it will mean something. He's one of the greatest to play this game. When I'm done, I'll probably look back on it and say it was a cool feat."

It was only the second time in playoff history that rivals managed triple doubles in the same game, the other in 1970 by New York's Walt Frazier and Milwaukee's Lew Alcindor, later known as Kareem Abdul-Jabbar.

Curry was excited for his statistical feat on a night of fast-paced playmaking and spectacular moves, but disappointed in his eight turnovers, twice what the team had in game one.

"There's an eight on the stat sheet that I need to correct," he said. "That's something that I can control, just being smarter with the ball."

He, too, shrugged off individual glory.

"We know this is far from over. We know how hard it is to be the best team in the league," Durant said. "So we got to just keep going, keep our foot on the gas and keep getting better every day."

Cavaliers coach Tyronn Lue said his team must stay tougher longer defensively after letting the game slip away in the third quarter and the start of the fourth. James had 10 first-half assists, the most in any playoff half of his career, while Curry had 15 points as Golden State took a 40-34 lead in the highest-scoring NBA Finals first quarter in 50 years and the second-highest ever.