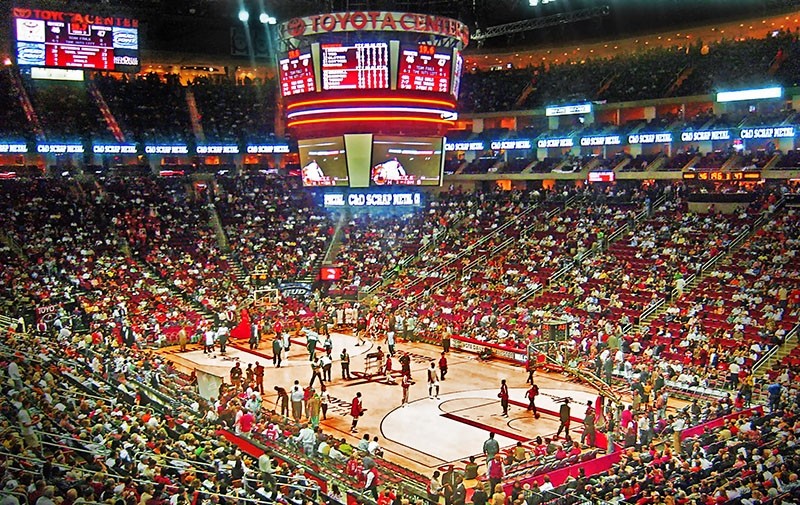 A general view of the Toyota Center, the home ground for Houston Rockets.
by Compiled from Wire Services Sep 06, 2017 12:00 am

Restaurant and casino owner Tilman Fertitta agreed to buy the Houston Rockets from Leslie Alexander on Tuesday for an NBA-record $2.2 billion, a person with knowledge of the details said.

The price surpasses the $2 billion Steve Ballmer paid for the Los Angeles Clippers in 2014. The value was confirmed to The Associated Press on condition of anonymity because terms were to remain private.

The deal must be approved by the NBA Board of Governors. It includes Clutch City Sports and Entertainment, which puts on shows and concerts at the Toyota Center.

"I am truly honored to have been chosen as the next owner of the Houston Rockets. This is a life-long dream come true," Texan billionaire said. "Leslie Alexander has been one of the best owners in all of sports, and I thank him immensely for this opportunity ... I am overwhelmed with emotion to have this opportunity in my beloved city of Houston."

Fertitta will be the team's sole owner. He is the owner of the Landry's restaurant chain and Golden Nugget casino and hotels. He was born in Galveston, Texas and has lived in Houston his entire adult life. The 60-year-old billionaire is the chairman of the board of regents of the University of Houston System and star of the reality show "Billion Dollar Buyer" on CNBC.

Alexander, who announced the team was for sale in July, took over as owner on July 30, 1993 for $85 million, and the Rockets went on to win back-to-back titles in 1994-95 behind the likes of Hakeem Olajuwon and Clyde Drexler. In 24 seasons under Alexander, the Rockets have won 56.9 percent of their games, fifth-highest in the league.

The franchise was estimated to be worth $1.65 billion by business magazine Forbes in February, coming in eighth among NBA teams, with a revenue of $244 million.

"I am excited to welcome and pass the torch to Tilman," Alexander said. "He is a Houstonian, business leader and committed to the success and excellence of the Rockets both on and off the basketball court. I have personally known Tilman for over 24 years and don't think I could have found anyone more capable of continuing the winning tradition of our Houston Rockets."

The 74-year-old Alexander decided to sell the team to spend more time with family and working on his charitable endeavors.

"It's been my great joy and honor to own the Houston Rockets for the past 24 years," Alexander said in a statement Monday.

"I've had the incredible opportunity to witness true greatness through the players and coaches who have won championships for the city, been named to All-Star and All-NBA teams, enshrined in the Basketball Hall of Fame, and done so much for our franchise and our fans."

"The Houston community has been home to me," Alexander said. "I will continue to support the charities I have made commitments to throughout the years. I'll always have a special place in my heart for the fans, partners, city officials and employees who care so deeply for this team.

"I've made this decision after much deliberation with my family and friends, and do so knowing the franchise is in great shape with the players, coaches and management team in place."

"Leslie Alexander is a true competitor who always searched for the right move to make his teams better, Silver said.

"Under his ownership, he created a culture of excellence with strong management that attracted Hall of Famers, All-Stars and coaching giants and brought two NBA championships and four WNBA titles to Houston.

"Well-respected around the league, he has been an active and influential owner whose vision helped to grow the game globally, especially in China."

Alexander put CEO Tad Brown in charge to "oversee the sales process with the league office, supported by my management team."

The Rockets were eliminated from the NBA playoffs during the Western conference semifinals in May.

The team acquired nine-time All-Star Chris Paul in June from Clippers, adding to a squad that consists of this year's MVP runner-up James Harden and Rockets guard Eric Gordon, who was named the 2016-17 NBA Sixth Man of the Year.