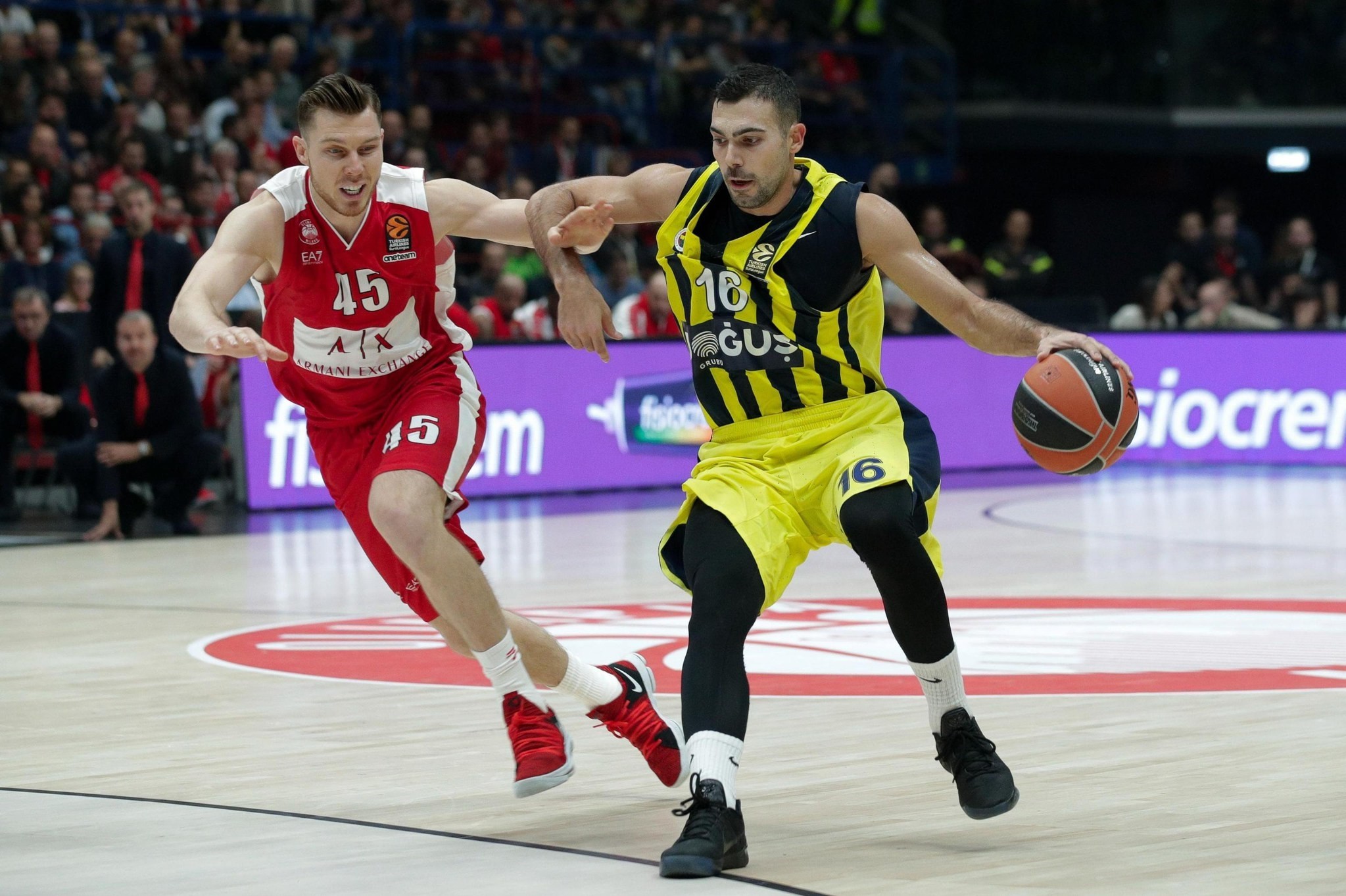 Dairis Bertans (L) and Kostas Sloukas in action during the Euroleague basketball match EA7 Olimpia Milano vs Fenerbahce Dou011fuu015f at the Assago Forum.
by Daily Sabah Oct 21, 2017 12:00 am

Turkish Airlines Euroleague's reigning champion Fenerbahçe Doğuş breathed a big sigh of relief after gaining its first victory of the season with a thrilling 86-92-overtime triumph over AX Armani Exchange Olimpia Milan at Mediolanum Forum. The champs appeared to be heading for a comfortable win after establishing a double-digit lead with 10 minutes left, but Milan capped a rousing comeback with Vladimir Micov's deep three to tie the game with 7.8 seconds remaining. But overtime belonged to Fenerbahçe as Brad Wanamaker led the charge with 5 points in the extra session to seal the win.

The visiting offense was led by 17 points and 9 assists from Kostas Sloukas, while Fenerbahçe's two Italian players also shined in their home country, with Nicolo Melli recording a double-double of 15 points and 11 rebounds, and Luigi Datome tallying 16 points. Wanamaker finished with 16 points, while Jason Thompson added 10. For Milan Dairis Bertans and Amath M'Baye combined for 7 three-pointers and 16 points apiece, while Jordan Theodore had 15 points and 7 assists, and Micov scored 15.

M'Baye sank 3 early triples to give his team a narrow lead, but Datome fired in 7 quick points and Melli added 5 as the visitors went ahead 16-21 before ex-Fener shooter Andrew Goudelock sank the last basket of the first quarter to make it 21-23. Milan started the second quarter strong and a triple from Bertans put the home team ahead 34-29, but Fenerbahçe responded and a pair of baskets from Thompson made it a 1-point game at halftime, 38-37.

Micov scored 5 quick points after the break, but the remainder of the third quarter saw Fenerbahçe go ahead and then establish a double-digit advantage, with Datome and Sloukas both scoring freely. Triples from Mantas Kalnietis and Bertans halved the deficit, but Wanamaker responded with a tough three as Fener protected its lead, which was extended again through Sloukas's jumper and Melli's corner three. But Milan kept fighting, and Bertans hit another triple to make it 71-77, before Theodore hit a tough layup, M'Baye also found a route to the basket and suddenly it was 75-77 with just over a minute remaining.

Then Melli drove to the basket to score with a foul, but Theodore pulled back two with a layup, Fenerbahçe turned it over and Micov took his chance to force overtime from long-range. Baskets were traded early in the extra period, but James Nunnally's triple and Wanamaker's three-point play gave Fenerbahçe a 6-point lead and another basket from Wanamaker secured the outcome.