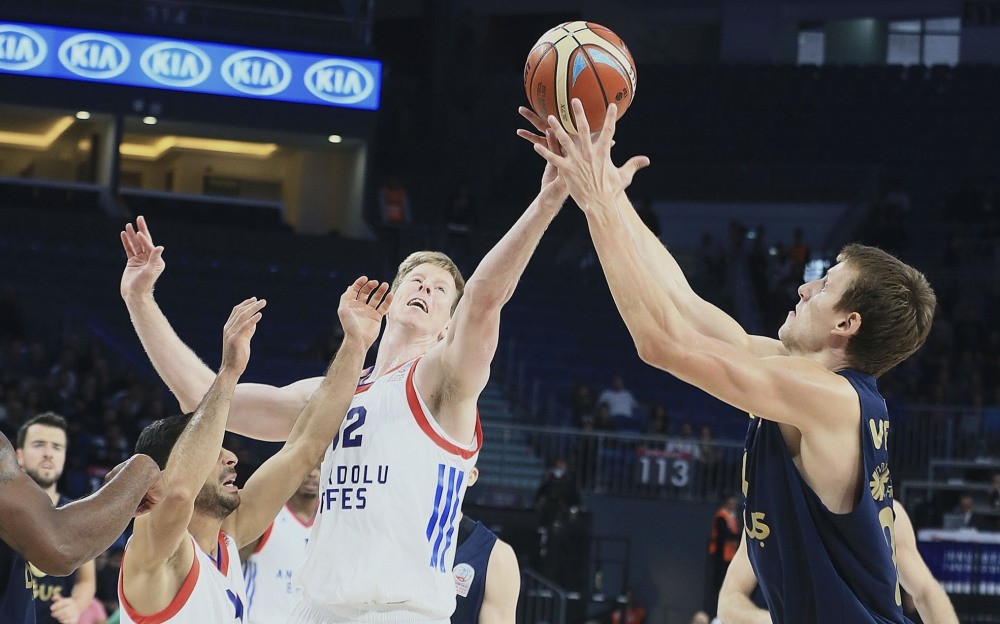 The first two-round week of the Turkish Airlines EuroLeague season kicked off with Round 3 Tuesday. The games were split into four games on Tuesday and four more today. Then all the teams will have quick turnarounds with Round 4 games tomorrow and Friday.

Round 3 will brace for a derby between two Turkish powerhouses today as Fenerbahçe Doğuş (1-1) take on Anadolu Efes (0-2). The current champs are the most accurate three-point shooting team (43.9 percent) in the league and tied for the league lead in blocks with 4.5 blocks per game, which will be key for Coach Zeljko Obradovic's side. Kostas Sloukas, who has 16.0 points per game (ppg) and Gigi Datome with 14.5 ppg have been the steady hands for Fenerbahçe, which is still working several new faces into the rotation. The good news for Efes is that it has committed the fewest turnovers, just 8.5 per game in the league so far.

On the other hand, it is the worst three-point shooting team, with just 16.2 percent of their attempts hitting home. Meaning, the team must improve this number immediately and the man expected to change that is league co-leader in scoring Erick McCollum (23.0 ppg), with Ricky Ledo (17.0 ppg) also playing a big role. Elsewhere, a pair of Spanish squad will face off when Baskonia Vitoria Gasteiz (0-2) hosts Valencia Basket (1-1).

Baskonia is the lowest-scoring team (66.0 ppg) in the league, but with weapons like Rodrigue Beaubois (22.0 ppg) and Toko Shengelia, there is hope for a big offensive game anytime. The opposition is led by red-hot guard Erick Green (23.0 ppg), who was the Round 2 MVP and is the league co-leader in scoring. Big man Bojan Dubljevic is another key piece for Valencia, which plays at a faster pace than Baskonia and has superior rebounding numbers.

In the other game today, one of basketball's greatest international rivalries will renew itself in the matchup between CSKA Moscow (1-1) and Panathinaikos Superfoods Athens (1-1). CSKA leads the league in rebounding (41.0 rpg) and offensive rebounds (16.5 orpg) in part thanks to league co-leader in rebounding Will Clyburn (15.0 ppg, 10.5 ppg, 2.5 spg). The Russian champs will look to former MVPs Nando De Colo (14.0 ppg) and Sergio Rodriguez to take control at home. The Greens can ill-afford to give away points from the free throw line like in recent week; Panathinaikos is the bottom of the league in free throw accuracy at 60.9 percent.

Playmaker Nick Calathes (18.5 ppg) will have a staunch challenge but is in great form after tying his career high in scoring last week. Chris Singleton (11.0 ppg, 7.5 rpg) will be asked to battle a deep CSKA frontline. Round 3 comes to a close in a matchup of reigning 7DAYS EuroCup champion Unicaja Malaga (1-1) and German champion Brose Bamberg (0-2). Unicaja is the second-worst three-point shooting team (23.7 percent) in the league and will need more accuracy from the likes of Dragan Milosavljevic (11.0 ppg) and Ray McCallum (10.0 ppg) to jumpstart the attack. Bamberg's most effective players have been center Leon Radosevic (15.5 ppg) and guard Ricky Hickman (14.5 ppg). Unicaja is the superior rebounding team with an average of 14.0 offensive rebounds per game, which is something Bamberg must limit to have an advantage as it seeks its first win of the season.