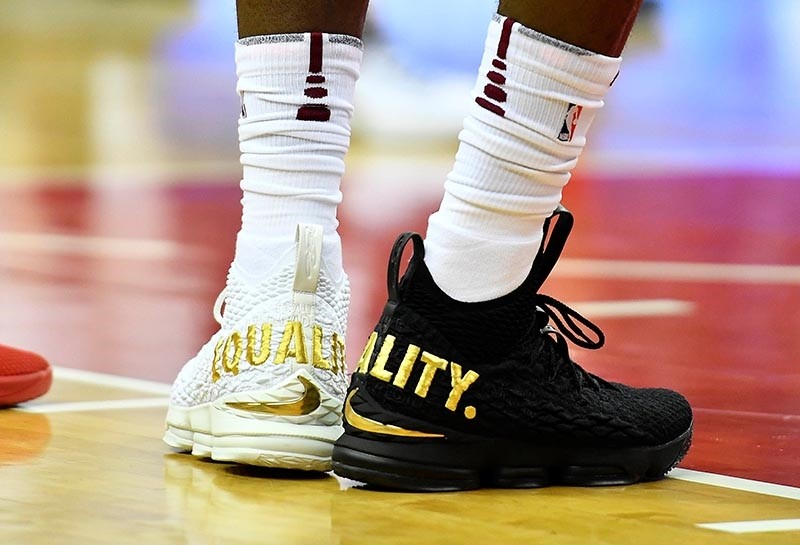 Cleveland Cavaliers forward LeBron James (23) wears Equality shoes against the Washington Wizards during the first half at Capital One Arena (Brad Mills-USA TODAY Sports)
by Associated Press
Dec 18, 2017 12:00 am

LeBron James made a statement during an NBA game with his shoes — one black, one white, with the word "equality" in capital gold letters on the back of each.

Then, after the game, James made a statement about President Donald Trump, saying: "This is a beautiful country and we're never going to let one person dictate how beautiful and how powerful we are."

The four-time NBA MVP was asked about his choice of footwear for the first half of his Cleveland Cavaliers' 106-99 victory over the Washington Wizards on Sunday night at an arena about a mile from the White House.

"Obviously, we know where we are right now," James began. "And we know who's at the helm here."

James then referred to his past discussions of Trump, saying: "Obviously, I've been ... very outspoken and well-spoken about the situation that's going on at the helm here. ... Equality is all about understanding our rights, understanding what we stand for and how powerful we are as men and as women, black or white or Hispanic. It doesn't matter your race."

Earlier this year, James called Trump "a bum" on Twitter and also said at Cleveland's preseason media day: "He doesn't understand how many kids, no matter the race, look up to the president of the United State for guidance, for leadership, for words of encouragement. He doesn't understand that, and that's what makes me more sick than anything."

Then, for Cleveland's first regular-season game, James donned a pair of black sneakers with the "equality" message. But this was the first time James chose to wear one white and one black shoe.

At halftime Sunday, he changed into other sneakers. James finished the game with 20 points, 15 assists and 12 rebounds.