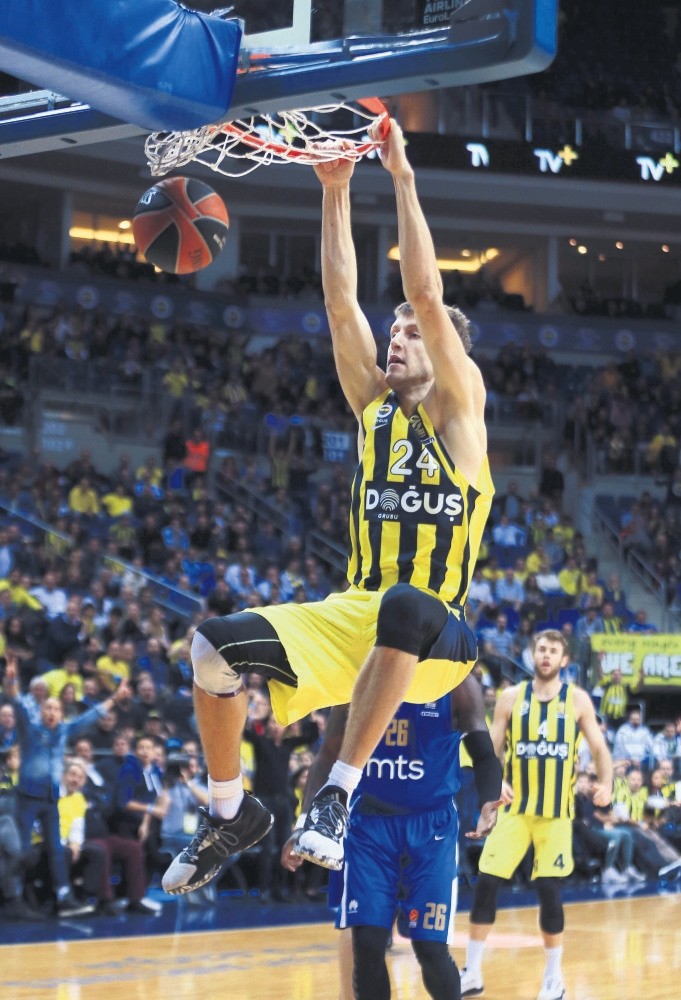 The two-round week in December kicked off with Round 13 matches Tuesday where all four home teams walked away winners. Fenerbahçe Doğuş and Real Madrid both secured big wins, while Zalgiris Kaunas and Panathinaikos Superfoods needed to work harder.

With the win, the Yellow Canaries improved to 9-4 in the standings while Zvezda dropped to 5-8.

Jan Vesely led the winners with 15 points and eight rebounds. Luigi Datome and Brad Wanamaker each added 13 points, while James Nunnally had 12 and Nicolo Melli 10 for Fenerbahçe. Ognjen Dobric led Zvezda with 15 points.

Fenerbahçe won all four quarters, outrebounded Zvezda by 38-29 and limited the guests to just 4-of-23 three-point shooting, all of which were key to this easier-than-expected win.

Meanwhile, another Turkish team in the EuroLeague, Anadolu Efes has a new man in charge, after appointing Ergin Ataman as the new head of the bench.

Ataman, 51, replaces Velimir Perasovic as the head coach on a deal through the end of the 2018-19 season. Efes relieved Perasovic of his duties Saturday.

Ataman also led Montepaschi Siena to the 2003 EuroLeague Final Four and the 2002 Saporta Cup crown. For the past five years, he coached Galatasaray Odeabank, leading the side to its historic 7DAYS EuroCup crown last year, and the Turkish League title in 2013.

In another match Tuesday, Zalgiris Kaunas held on against Brose Bamberg for a tough 88-84 victory at Zalgirio Arena.

The Lithuanian champs boosted their record to 8-5 while knocking Brose down to 6-7. Arturas Milaknis starred for the winners with career-highs of 20 points and six three-pointers made to lead an excellent long-range Zalgiris attack that connected on 10 of 19 from downtown (52.6 percent).

Paulius Jankunas added eight of his 17 points in the fourth quarter for the winners. Dorell Wright paced the German champs with 22 points.

Elsewhere, Panathinaikos Superfoods made it seven out of seven at home with a convincing 89-76 victory over Maccabi FOX.

The first half was closely contested but the home team put on an intense defensive show before surging ahead in the third quarter, and Maccabi never really threatened a comeback.

Backup point guard Lukas Lekavicius impressed with 13 points and four assists in an expanded role with starter Nick Calathes sidelines with a shoulder injury. The Greens also dominated inside as James Gist registered a double-double of 15 points and 10 rebounds and Chris Singleton posted 14 points and 10 boards. Norris Cole led Maccabi with 14 points, 13 of which came in the first half.

Madrid improved to 7-6, while Valencia dropped to 3-10 and saw its losing streak grow to nine in a row. Facu Campazzo led the winners with 14 points and eight assists. Felipe Reyes, who played his 300th EuroLeague game, Jaycee Carroll, Walter Tavares and Trey Thompkins each added 12 points for Madrid. Thompkins added 11 rebounds for a double-double. Bojan Dubljevic paced Valencia with 18 points. Valencia led 51-53 midway through the third quarter, but Tavares and Campazzo stepped up to put Madrid in charge for good.

Madrid boosted its margin to 69-58 early in the fourth quarter and cruised the rest of the way.