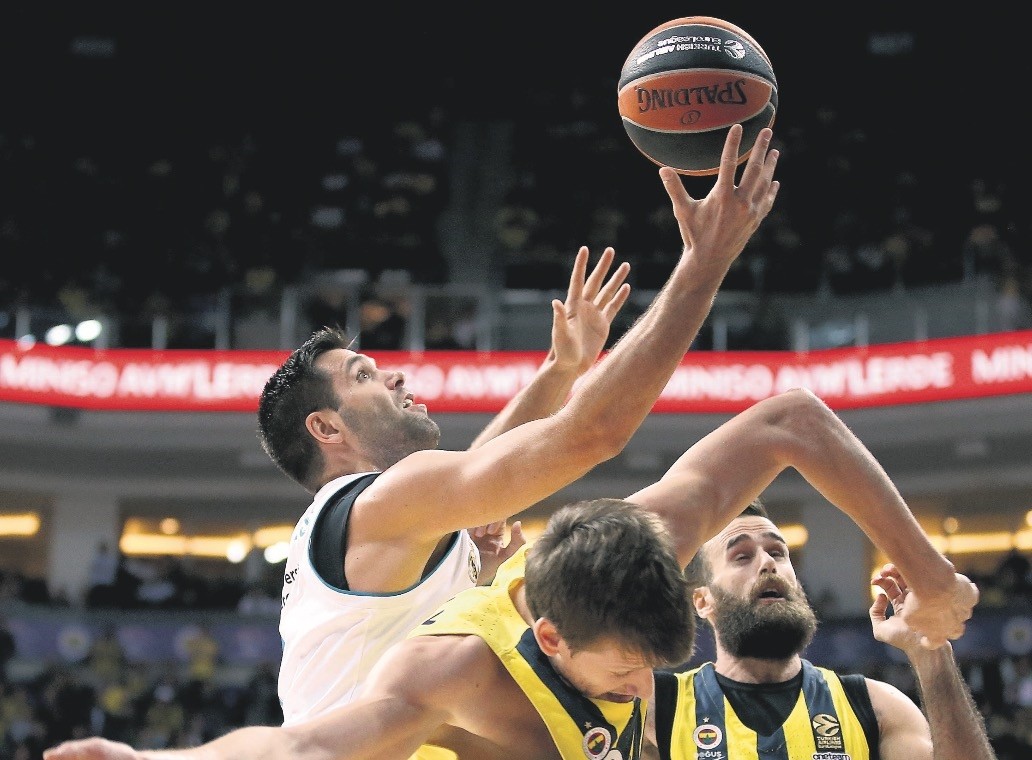 Jan Vesely (C) and Luigi Datome (R) of Fenerbahu00e7e in action against Felipe Reyes (L) of Real Madrid during the Euroleague basketball match in Istanbul, last week.
by Daily Sabah Jan 05, 2018 12:00 am

Having lost its place in the all-important top four with a run of three losses in four games, reigning champion Fenerbahçe (9-6) will attempt to reignite its season as they host a dangerous Baskonia (7-8) to kick off day two of game week one in the second half of the Turkish Airlines EuroLeague Regular Season. Faltering defense has been Fenerbahçe's downfall, allowing an average of 83.7 points in its three recent losses compared to a season-long average of just 72, which is second best in the competition. That defense will be thoroughly tested by a Baskonia offense that ranks among the league's most explosive, scoring at least 81 points in 10 of its last 11 games. But the only team to stop Baskonia from reaching that figure was Fenerbahçe in a comprehensive Round 10 win on the road.

Elsewhere, red-hot Zalgiris Kaunas (10-5) will look to continue its remarkable season by gaining a sixth consecutive win with a trip to face Zvezda (6-9), which got itself back into the fringes of the playoff zone with a hard-earned road win at Milan last week.

As for the match between Brose Bamberg and Khimki Moscow Region, both teams need to boost their playoff hopes by overcoming a poor run of form, with Brose (6-9) losing five of its last six, while Khimki (8-7) has dropped three out of four and only won one of its last five road trips.

Meanwhile, after losing the top spot with last week's loss against Zalgiris, Olympiacos (11-4) will attempt to start another winning run with the visit of a Milan (4-11) side that must feel due a change in luck after its last six losses all came by a margin of eight points or less. One of those was an 85-86 home loss to Olympiacos, which will attempt to slow down Milan's dangerous scorers by leaning upon the best defense in the competition, allowing just 71 points per game. With Olympiacos missing several big bodies through injury, Milan will hope excellent rebounders Kaleb Tarczewski (6.7 boards per game) and Arturas Gudaitis (5.9 rebounds per game) can establish inside dominance.

In the final match of the day, Real Madrid (9-6) will attempt to deprive Maccabi (8-7) of that status in the Spanish capital. Finding a way to stop the league's top-rated performer, Luka Doncic, will clearly be a major challenge for Maccabi, but rejuvenated veteran Felipe Reyes is also in outstanding form with double-digit scoring in his last four games. Maccabi has been hit or miss this season and has lost three of its last four. The defense has been the team's downfall; it allowed 101, 89 and 89 points in those recent losses.