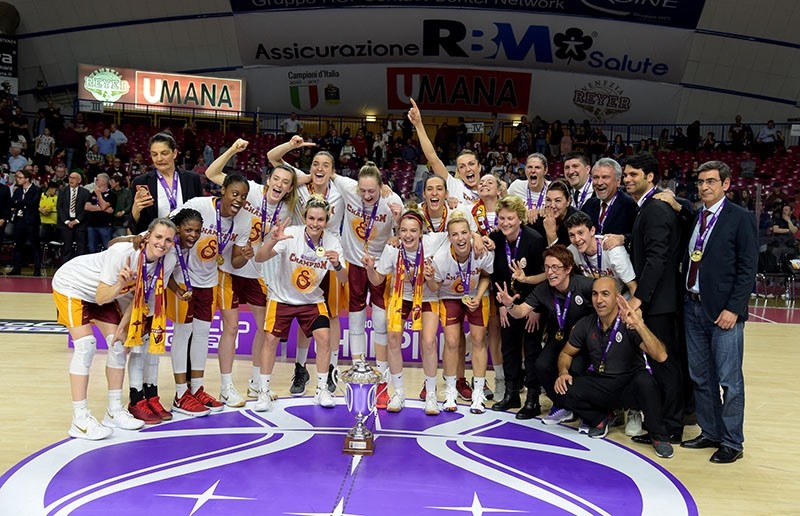 With the second EuroCup Women basketball title, Galatasaray is now the most decorated team in Turkish basketball

Galatasaray clinched its second EuroCup Women basketball title Wednesday, despite losing 72-65 against Reyer Venezia in the return leg of the final.

The Lions were buoyed by a huge 22-point first leg advantage that ultimately proved too much for Reyer Venezia.

This is Galatasaray's second EuroCup Women title after 2009 and 13th basketball silverware overall, making it the most decorated basketball club in Turkey.

The Galatasaray women's basketball team was also in the EuroLeague Final Four 2014 in Russia after they won against another Turkish team Fenerbahçe.

As for Wednesday's title win, Reyer Venezia tried to overturn a 22-point advantage from the first meeting a week earlier. It halved the deficit with three minutes to go in the third quarter.

Having drained a huge triple, just moments earlier, Riquna Williams had a wide-open look for another to continue the impressive momentum and perhaps put doubts into the minds of Galatasaray at a possible 14-point advantage. But, it rimmed out and the visitors went down the floor and profited from a lucky drop off the glass as Kaela Davis made a big 3-pointer.

The visitors eased any pressure with cool heads from the free-throw line by making 19-of-21. They also kept Venezia off the glass, winning the rebound battle 41-33.

She may have been on the fringes of late and not a central figure for the title winners, but Davis chose the perfect time to have her best game in a Galatasaray vest and of her short overseas career.

The WNBA star shone with 21 points and proved to be the difference-maker. The towering Gintare Petronyte was also a rock again, dropping the anchor in the paint for a stellar double-double of 19 points and 13 rebounds.

Galatasaray center, Gintare Petronyte said: "I am so proud and it is special to do it in front of the traveling Galatasaray fans who always follow us wherever we go. They showed what it means to them in that first leg when we had such a big crowd to help us get the big win. I am so happy even though we lost this second game. We were focused to win, but what is most important is that we won a title for this great club and its supporters."

Darüşşafaka is just the second Turkish team to win the EuroCup title. This was Darüşşafaka's first European silverware and eighth in Turkish basketball history.