India's first ever NBA games match up Pacers, Kings in 2019 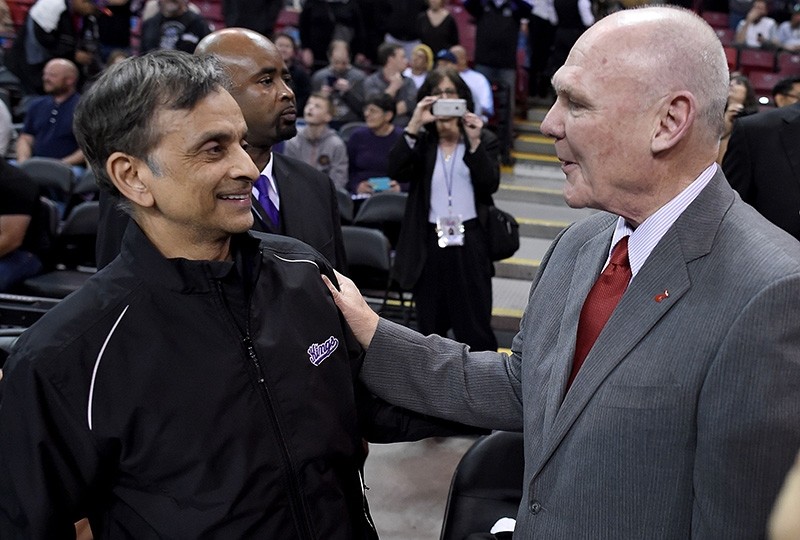 In this file photo taken on Feb. 20, 2015, head coach George Karl of the Sacramento Kings (R) gets greeted by the owner Vivek Ranadive (L) prior to the start of the game against the Boston Celtics in Sacramento, California. (AFP Photo)
by Compiled from Wire Services Dec 20, 2018 12:00 am

The NBA announced Thursday it will become the first North American professional sports league to play games in India when the Indiana Pacers and Sacramento Kings play a pair of preseason games there next year.

Billed as the NBA India Games, the contests will be played on Oct. 4 and 5 at the NSCI Dome in Mumbai, India's largest city, and televised live in India.

"As an Indian-American, it is an honor to help bring this historic moment to the country where I was raised," Ranadive said in a statement. "The sport is experiencing tremendous growth in India and we are excited about continuing to expand the NBA's reach to fans across the globe. The world wants to watch basketball and India is a fast-growing new frontier."

According to the NBA, the games will air live in India and reach more than 200 countries and territories via TV and digital and social media. The league will also host interactive fan activities, youth basketball programs and community outreach events.

"We're thrilled to be one of the first two teams to play the first-ever game in India and proud to be part of the expanding NBA worldwide footprint of our game of basketball," Pacers owner Herb Simon said.

Sacramento stands 16-15, but only a half-game behind eighth-place San Antonio and a playoff spot in the Western Conference. The Kings feature this year's second pick from the NBA Draft, Marvin Bagley III, plus past high selections De'Aaron Fox and Buddy Hield.

"Our inaugural NBA India Games will help further untap the enormous basketball potential in a country with a thriving sports culture and a growing, young and engaged population," NBA commissioner Adam Silver said.

Through its NBA Global Games program, the league has played games in numerous countries around the world, including Italy, Mexico, England, France, China, Brazil and Germany.

In October, the Dallas Mavericks and Philadelphia 76ers played a pair of preseason games in China, one in Shanghai and the other in Shenzhen.