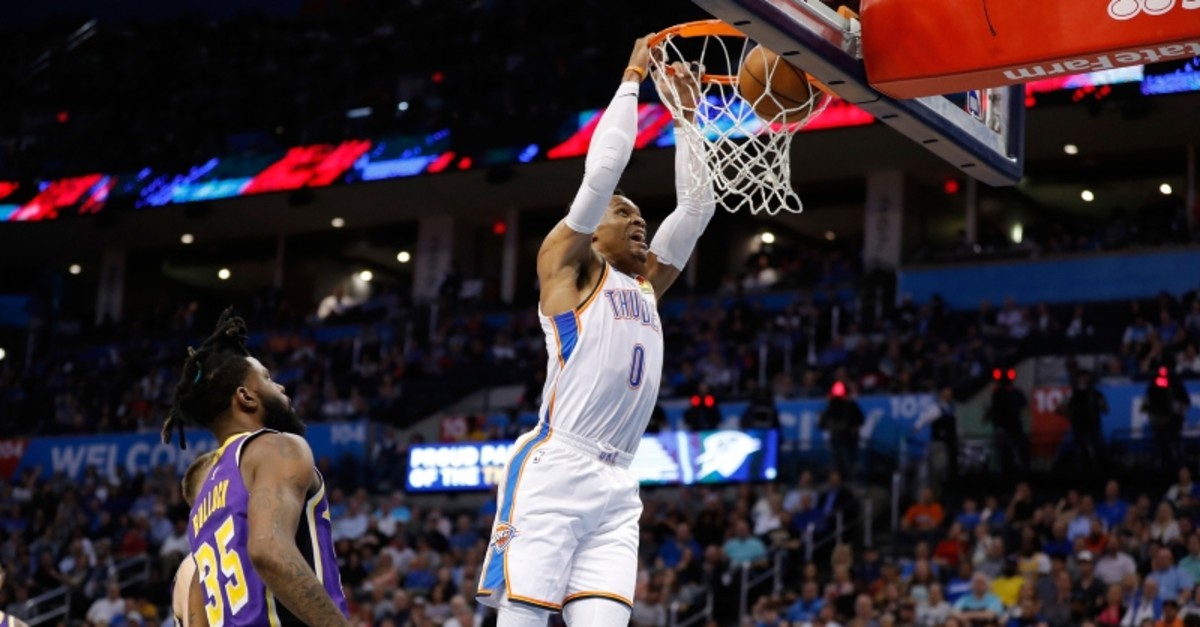 Westbrook was already closing in on a third straight season averaging a triple-double -- achieving double digits in three key statistical categories in a game.

In the 2016-17 season he set the record for most triple-doubles in a season with 42, averaging a triple-double in that campaign and again last season.

With his performance on Tuesday in a 119-103 victory over the Los Angeles Lakers, he joined NBA icon Wilt Chamberlain as the only other player in NBA history to post a triple-double of at least 20 points, 20 rebounds and 20 assists.

Chamberlain did it in 1968, when he had 22 points, 25 rebounds and 21 assists in a game for the Philadelphia 76ers against Detroit.

Westbrook dedicated his performance to slain rapper Nipsey Hussle, who was gunned down on Sunday in Los Angeles.

Playoff bound but losers of seven of their last 10, the Thunder can use every win they can get in the final week of the regular season.

Westbrook, who waved off coach Billy Donovan's attempt to sub him out of the contest, finished off the feat in the final minute, nabbing Lance Stephenson's miss with 41 seconds left, drawing a large ovation from the crowd.

Whether or not Westbrook would cap off the feat was the only question down the stretch, as Oklahoma City enjoyed a rare chance to savor a win during what has been a rough second half of the season.

Westbrook clinched the triple-double -- his 31st of the season -- with 4:38 left in the third quarter, hitting a contested jumper.

A few seconds later, after a Westbrook steal, his breakaway dunk lifted the Thunder to a 15-point lead.

After starting the game 2 of 14 from the field, Westbrook hit his next five shots to help Oklahoma City separate with a 35-point third quarter.

Jerami Grant led the Thunder with 22 points while Paul George had 19.

After jumping ahead by as many as 11 points early, Oklahoma City's lead dissipated throughout the second quarter until Kentavious Caldwell-Pope put the Lakers ahead for the first time since the game's opening moments on a 3-pointer with just less than four minutes remaining before halftime.

The Thunder closed the half on an 11-6 run to take the lead going into the locker room.

It was the first time the Thunder had led at the half since March 14. They'd trailed at the break in eight consecutive games and 17 of their 20 games since the All-Star break.

Caldwell-Pope led the Lakers with 23 points.

The Thunder won for just the third time in their last 10 games while the Lakers' two-game winning streak ended.

Los Angeles was once again without much of its star power, with LeBron James, Kyle Kuzma and Brandon Ingram among those missing the game due to injuries.

Playoff-bound but losers of seven of their last 10, the Thunder are locked in combat for the seventh seed with the San Antonio Spurs, who beat the Atlanta Hawks 117-111 on Tuesday.

Both teams own records of 45-33, with the Spurs holding the tiebreak advantage and the eighth seed destined to take on the number one seed in the first round.

The two-time defending champion Golden State Warriors went some way to ensuring that top seed will belong to them with a 116-102 victory over the second-ranked Denver Nuggets.

"We handled our business," said Golden State star Stephen Curry, who finished with 17 points, five rebounds and five assists. "We did what we were supposed to do -- protect our home court.

"Obviously we understand we're chasing that number one seed. I guess we control our own destiny now," he added after the Warriors stretched their lead over Denver atop the West to two games with five regular-season games remaining.

The Warriors also own the tiebreaker, thanks to winning three of four against the Nuggets in the regular season.

DeMarcus Cousins paced the Warriors with a season-best 28 points.

Kevin Durant added 21 points -- including two massive first-half dunks -- before he was ejected in the third quarter after receiving two quick technical fouls.

Durant was incensed at the lack of a foul call on a missed three-point attempt. His 14th and 15th technical fouls of the season mean he is one away from an automatic one-game suspension.

Elsewhere in the West, James Harden scored 36 points to lead the playoff-bound Houston Rockets to a 130-105 victory over the Sacramento Kings.

Houston never trailed and led by as many as 30 points, matching their franchise record with 26 three-pointers.