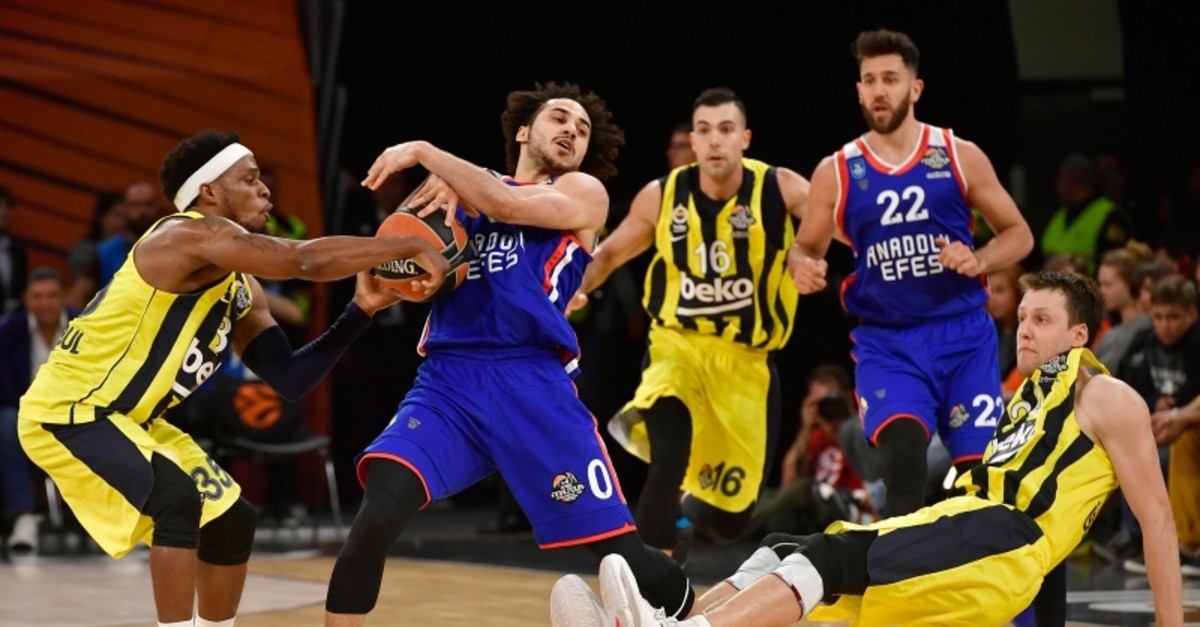 Anadolu Efes defeated its Istanbul rival in the first-ever all-Turkish semi-final at the Euroleague. American star Shane Larkin was the shining star of the match, spearheading the club to a decisive victory

For the first time in history, two Turkish clubs played against each other in a Turkish Airlines EuroLeague basketball tournament Final Four match late Friday, with Anadolu Efes guaranteeing a spot in the final match.

With a decisive victory of 73 - 92, the navy blue-whites will face either CSKA Moscow or Real Madrid in the final, depending on the result of the remaining semi-final match, which was due later in the day.

Fenerbahçe started the match strongly, closing the first period ahead of Efes with a 1-point margin.

In the second period, Anadolu Efes took the helm of the match, dominating the Yellow Canaries more than the first half.

Anadolu Efes' Shane Larkin was the shining star of the match, scoring 13 points only in the first half.

Fenerbahçe's Melli, Vesely and and Green all scored 7 points each in the first half.

In the third period, Anadolu Efes' dominance grew even stronger, with Larkin more than doubling his points.

The last period was under total Anadolu Efes dominance, with Larkin adding even more to the scoreboard.

With the final result of 73 - 92, Anadolu Efes left the hardwood awaiting the result of the last semi-final match.

Anadolu Efes defeated Spain's Barcelona Lassa 80-71, advancing the club to the Final Four for the first time since 2001.

The victory earned Fenerbahçe its fifth consecutive Final Four ticket in the league.

Ataman vs. Obradovic: A thrill for basketball fans

The Turkish Airlines (THY) EuroLeague Final Four marked a first for Turkish basketball on Friday night. For the first time in history, two Turkish teams, Anadolu Efes and Fenerbahçe Beko, competed against one another in the Final Four, making Turkey the fifth country to accomplish the feat since 1988 after Spain, Italy, Greece and Russia.

As much as the game was a competition between two teams, it was also an exciting face-off between two great coaches.

Anadolu Efes, the first Turkish team to ever join the Final Four event, was part of the thrill again after 18 years. The navy blue-white team played in the finals in Suprolig in 1999-2000 and 2000-01 and managed to vie at the event where the last four teams competed for the first time in the EuroLeague, which was brought under a single name in 2001-02.

This was the third EuroLeague Final Four for Anadolu Efes head coach Ergin Ataman. Ataman also coached Anadolu Efes back in the 1999-2000 season when it was still called the Suprolig. Later, he took Italian side Montepaschi Siena to the Final Four in the 2002-03 season.

Some of the success achieved by the veteran coach during his career includes a championship in the Turkish league with Beşiktaş after 37 years in 2012. He later enjoyed a EuroChallenge championship with Beşiktaş. He also made Galatasaray league champion after 23 years in 2013. The miracle worker coach also enjoyed the first EuroCup championship with Galatasaray in Turkish basketball history. And lastly, his coaching made it possible for Anadolu Efes to play in the EuroLeague Final Four after 18 years.

Anadolu Efes won 20 matches and lost 10 others in the EuroLeague normal season, ranking fourth in the season and entering the playoffs. The Istanbul team, which encountered fifth-placed Barcelona Lassa in the quarterfinals, managed to make it to the Final Four with a 3-2 series win.

Fenerbahçe Beko, on the other hand, is playing the fifth Final Four in a row. The yellow-navy blue team played in the finals in the last three seasons. It first defeated the Spanish Real Madrid and then Greek Olympiacos in the Final Four held in Istanbul in 2017, achieving the greatest club success in Turkish basketball history and reaching the championship.

Obradovic, a "legend" for being the most-winning EuroLeague coach with nine titles, one being with Fenerbahçe Beko, is looking to add to his resume in his sixth season with the Yellow Canaries.

In his 24 seasons in the EuroLeague, Obradovic has managed to make it to the Final Four 18 times. He carried Fenerbahçe Beko to the Final Four for the fifth time in the past six seasons. He also took Panathinaikos eight times, Real Madrid twice, and Partizan, Benetton and Joventut Badalona one time each to the Final Four.

In addition to nine titles, Obradovic's teams have also become runner-ups three times. His teams also became third twice and fourth three times. He was also named the first head coach to carry a team to the Final Four five times in a row.

Fenerbahçe Beko was 25-5 in the EuroLeague regular season this year. Completing the regular season on top, Fener became the first Turkish team to finish the season as the leader in the new format.

Fenerbahçe Beko beat eighth-placed Zalgiris Kaunas in the quarterfinals, winning the first match on its home court, and losing the second match in the best of five series. The team then went on to win two away matches in Lithuania to make it to the Final Four.