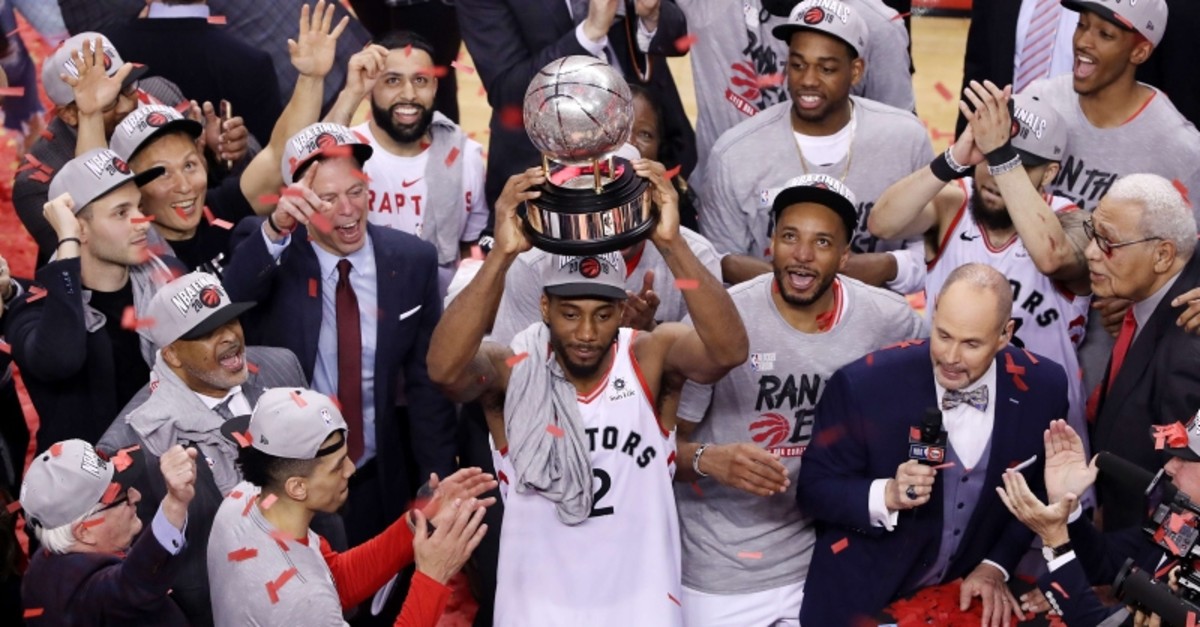 Toronto Raptors' Kawhi Leonard hoists the trophy after the Raptors defeated the Milwaukee Bucks 100-94 in Game 6 of the NBA basketball playoffs Eastern Conference finals Saturday, May 25, 2019, in Toronto. (The Canadian Press via AP)
by Associated Press May 26, 2019 12:39 pm

Kyle Lowry stole the ball and pushed it ahead, then waited for Kawhi Leonard to arrive before feeding his All-Star teammate for a thunderous one-handed slam over Giannis Antetokounmpo .

"The building exploded after that dunk," Leonard said.

It sure did. Now imagine how it will sound when the NBA Finals come to Toronto for the first time next week.

Leonard had 27 points and 17 rebounds to lead the Raptors into the finals for the first time with a 100-94 victory over the Milwaukee Bucks on Saturday night. His big dunk with 6:46 to go in the fourth quarter was the final basket in a game-changing 26-3 run that began late in the third.

"It was kind of a momentum capper," Lowry said. "We were on a run, and why not feed the big dog? Let the big dog eat."

The Raptors overcame a 15-point deficit to win the series in six games and will host the Golden State Warriors in Game 1 of the NBA Finals on Thursday night.

It will be the two-time defending champions against a Raptors team that will finally bring the NBA Finals outside the U.S. after entering the league in 1995.

"They're one of the greatest teams in history," Raptors coach Nick Nurse said of the Warriors. "It will be a tall task, but we'll try to figure it out."

Pascal Siakam scored 18 points, Lowry had 17 and Fred VanVleet 14 for the Raptors.

Lowry held the game ball and picked up his children after the game, finally getting to the championship round after the Raptors kept falling short against Cleveland.

"It's taken a long time to get here in my career," Lowry said. "I've run into one guy for a while."

Toronto was eliminated by LeBron James and the Cavaliers in three straight postseasons before shaking things up last summer with the acquisition of Leonard, the 2014 NBA Finals MVP who was acquired from San Antonio and has carried the Raptors in this postseason.

"I just want to win," he said. "I don't care about being the best player. I want to be the best team."

Antetokounmpo had 21 points and 11 rebounds for the Bucks, but the NBA's top team in the regular season saw its bid for a first finals berth in 45 years come to a disappointing end with a fourth consecutive defeat.

Even Nurse found his team's turnaround hard to believe.

"The roster that was put together for this season, as the season started going, you started feeling like it was special and could do special things, including advancing past tonight, but it didn't happen," Budenholzer said.

Down 76-71 to start the fourth, the Raptors tied it with an 8-2 run while Leonard and Antetokounmpo were both on the bench. Serge Ibaka's dunk with 10:32 to go tied it at 78.

Antetokounmpo returned after a timeout, but Leonard kept sitting. That didn't matter to Toronto, with Siakam's basket giving the Raptors an 80-78 lead, their first lead since it was 6-3.

Toronto made 12 of 27 3-point attempts, including four of eight in the fourth quarter.

Siakam, who missed a pair of free throws late in the fourth quarter of Toronto's double-overtime win in Game 3, hit one to make it 98-94. Leonard grabbed the rebound on the second and was fouled. He made both, putting the Raptors up 100-94 with 3.9 seconds to go.

Malcolm Brogdon and Khris Middleton each made a pair from long range as the Bucks shot 6 for 9 from 3-point range in the first and closed the quarter with 10 unanswered points to lead 31-18. Toronto shot 6 for 19 in the opening quarter, missing six straight twice in the first 12 minutes.

The Bucks extended their lead to 38-23 on a 3 by Ersan Ilyasova with 7:46 left until half. Toronto cut the gap to 46-43 on a 3 by VanVleet with 1:07 left in the second, but Eric Bledsoe answered with a 3 and Antetokounmpo split a pair at the line, giving the Bucks a 50-43 advantage at the intermission.

The lead went back to 15 in the third before Leonard finished the period with a flourish. He had eight points in the final 2:01 and Toronto closed with a 10-0 run, cutting a 15-point deficit to 76-71.

Bucks: Milwaukee shot 4 for 16 in the second but three of its made baskets were 3-pointers. ... The Bucks had six points in the paint in the first half. They finished with 28. ... Budenholzer was called for a technical foul on Milwaukee's first possession of the second half. Leonard missed the free throw. ... Antetokounmpo shot 5 for 10 at the free throw line.

Raptors: Danny Green, who missed all three of his field goal attempts in 16 minutes in Game 5, had another rough night. Green shot 0 for 4 in 14 minutes. ... Leonard's 17 rebounds were his most in any game this postseason. ... Lowry had eight assists.

Raptors fan and 'global ambassador' Drake sat in his regular seat adjacent to the Toronto bench. The rapper wore a black hoodie with 'KAWHI ME A RIVER' printed on the back.

Outside the downtown arena, fans flooded streets, bringing traffic to a standstill. One video posted on social media showed a group of fans partying on the roof of a Toronto city bus. Fans surrounded Marc Gasol's car as he was driven out of the arena , and the center rolled down his window to trade high fives with the crowd.

Toronto' reserve Norman Powell scored nine points on his 26th birthday. Standing at the back of the room, Powell's mother wished him a happy birthday at the end of her son's press conference.

The last team to overcome an 0-2 deficit and win a conference finals was Oklahoma City, which beat San Antonio in six games in 2012 after losing the first two on the road. Ibaka played for that Thunder team, while Leonard was a Spurs rookie.

The NBA Finals comes to Canada for the first time when the Raptors host the Warriors on Thursday night. Toronto swept Golden State in the regular season.