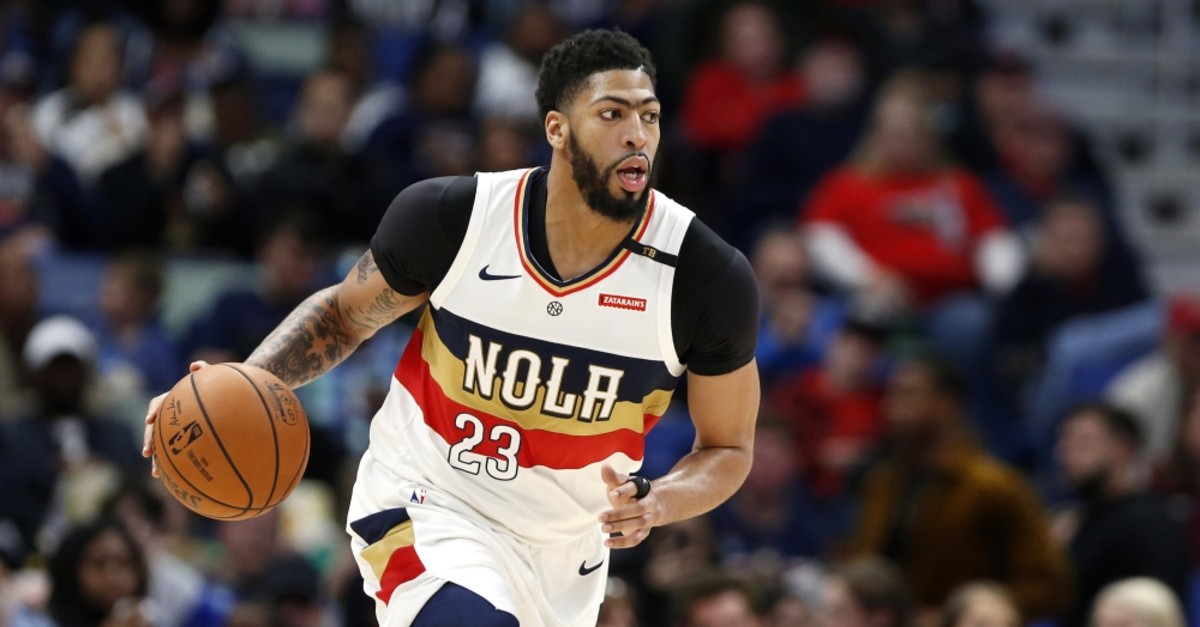 New Orleans Pelicans forward Anthony Davis brings the ball up during the first half of a home matchup against the Phoenix Suns, March 16, 2019.
by reuters
Jun 17, 2019 12:24 am

The deal, which cannot be made official until July 1, gives the Pelicans two of the top four picks next week, after they won the lottery for the top overall pick. According to ESPN, they will take Duke star Zion Williamson first overall and consider trading the fourth overall pick, with several teams already expressing interest.

The New York Times reported that Charlotte Hornets guard Kemba Walker is expected to be a top target in free agency for the Lakers in the wake of the deal for Davis. The Lakers also managed to keep forward Kyle Kuzma, one of the players mentioned earlier in a possible deal.

The Boston Celtics were also involved in separate talks with the Pelicans for Davis, ESPN reported earlier this week, and the Brooklyn Nets and Los Angeles Clippers had interest in Davis but didn't make much progress in discussions with New Orleans.

Citing league sources, ESPN reported Saturday that the Celtics resisted including Jayson Tatum in a trade package, ultimately leading to the Pelicans making the deal with the Lakers. Earlier this week, Davis' agent, Rich Paul, who also represents the Lakers' LeBron James, told Sports Illustrated a deal to Boston would have resulted in a one-year rental agreement before Davis enters free agency in July 2020. The Lakers pursued Davis after Paul announced the big man wanted a trade last winter. With Magic Johnson (Lakers) and Dell Demps (Pelicans) both out of jobs after leading those trade talks, and a fresh list of demands provided teams on Monday by first-year Pelicans team president David Griffin, there was optimism the Davis deal would happen.Davis, a six-time All Star, played only sparingly after the February trade deadline came and went, and didn't appear at all over the final seven games. He reportedly plans to sign a new contract with the Lakers once he becomes eligible for free agency in 2020.

The No. 1 overall selection in the 2012 NBA Draft, Davis has ave

raged 23.7 points and 10.5 rebounds over his first seven seasons with the New Orleans franchise. He produced averages of 25.9 points and 12.0 rebounds in 56 games in 2018-19, the lowest number of games played in his career.

Meanwhile, New Orleans has the benefit of starting over with Williamson as a centerpiece. He could be surrounded by: Ball, a 6-foot-6 guard and the second overall pick of the Lakers in the 2017 draft who went on to average 9.9 points, 5.3 rebounds and 5.4 assists per game in 2018-19, his second season in L.A.; Ingram, a 6-9 forward and the second overall pick in 2016 who averaged 18.3 points, 5.1 rebounds and 3.0 assists in his third season, which ended prematurely after he developed a blood clot in his right shoulder; and Hart, a 6-5 guard who was a first-round pick (30th overall) by the Utah Jazz in 2017. In his second season with the Lakers, he averaged 7.8 points, 3.7 rebounds and 1.4 assists while starting 22 of the 67 games he played.

Ball and Ingram, who is expected to return to the court in July and be ready for training camp this fall, are considered possible starters alongside Williamson and Jrue Holiday, the 6-4 veteran point guard who averaged a career-high 21.2 points a game this season.

LaVar Ball, Lonzo Ball's famously vocal father, reacted to the trade of his son by guaranteeing the Lakers will never add to their collection of 16 NBA titles.

"I guarantee: Like I say again, it will be the worst move the Lakers ever did in their life, and they will never win another championship," Ball told ESPN. "Guarantee it. They're going to regret it.

"I'm going to have fun with it. Because I told you all, it was crashing down. Now [the Lakers] completely crashed, but at least my son got off the boat before the thing exploded. I gave them a chance. You can rewind it and go back. I said if you get the three Ball brothers, you can survive this. You let him go, oh, it's going to be a cold day in hell. Trust and believe that."